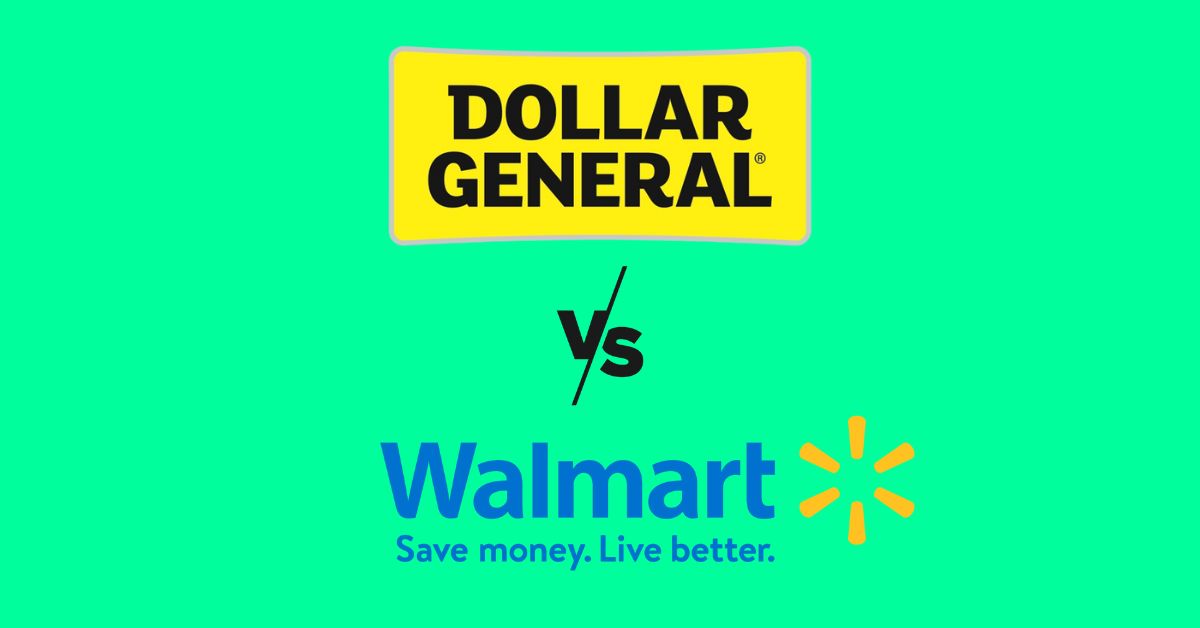 Dollar General vs Walmart: Whether it is about shopping for regular days or for an upcoming event – every household needs a good store that can guarantee them three things: good quality, fair and cheap prices with more in variety.

For the same reason, two retail labels – Dollar General and Walmart have recently gained attention because both offer daily necessities at cheap and low prices with quality being the best since their products come from well-known brands.

However, people can’t just travel from Dollar General to Walmart to buy one or two items just because that item was priced a little higher at Dollar General – the idea doesn’t fit right. Likewise, they are confused between Dollar General and Walmart, as to which among these is a better option.

Are you among those confused people who wish to know whether Dollar General or Walmart will win the comparison bottle? If so, then you must have a look at our unbiased and updated comparison article between Dollar General and Walmart.

Dollar General Corporation is a well-known American chain that has a variety of stores in the US. Dollar General claims to make it easier for you to shop for regular needs, and it delivers high-quality products from popular brands at everyday low prices at convenient locations near you or online through its website and app.

It is one of the popular labels from the ‘dollar’ stores. And while you meet with multiple promotional deals on its website, in the app, and physical stores, it also helps you explore digital coupons to save on almost all orders.

Also, it has a weekly ad section through which you can shop for groceries and relevant items for cleaning and such at even lower prices. Additionally, you can connect your PayPal account to Dollar General online and pay for your order with just one click and without any extra hassle.

Walmart INC is probably the most famous American multinational retailer operating a set of grocery stores, discount stores, and hypermarkets all across the US.

It is a go-to place for the majority of the US population because while it offers a huge selection of categories and variety, it also helps you save money on everyday products and help you live a better life with quality products in use.

On top of everything, it has the premium facility of Walmart plus where you can unlock a good bunch of premium services like free delivery on all your orders irrespective of the order total and your address.

Walmart claims to help you save over $1000 every year with this membership. For this, it offers a free 30-day trial and after that, it’ll charge you around $12.95 per month.

In the table mentioned below, we are going to give you a thorough comparison between the updated prices of products from both labels:

As you can clearly see, the prices at Dollar General are higher than at Walmart. A bunch of cents or a dollar will not make a difference for all, but in case you have to choose between Dollar General and Walmart – then will highly suggest you go for Walmart.

Dollar General has distribution centers in 16 states and is widespread across 47 US states except for three – Hawaii, Montana, and Alaska.

Walmart operates about 10,589 stores globally with 4650 of Walmart super centers being in 49 US states out of 50. The only state missing is Hawaii as of January 2023. Most of the Walmart locations are based in Texas with over 500 stores, which is about 11% of all the Walmart stores in the US.

Dollar General vs Walmart: Which is the Best?

Let’s start with the variety in products and categories – while Walmart offers a huge selection of departments, where you can find anything and everything at a single glance, Dollar General here doesn’t offer many search categories and its list of departments is limited.

Talking about the pricing, as already mentioned, Dollar General, in comparison with other dollar shops and Walmart, has rated higher for almost all the products it delivers. Apparently, Dollar General rates are about 2% higher than Walmart.

On top of that, it has limitations over quantity in one unit, compared to which, Walmart has more choices and enough variety to choose from.

Hopping onto the quality of the products, you might not understand the difference between qualities right away, but according to the user reviews who have tried both Walmart and Dollar General – they have clearly stated that Walmart offers better quality products than Dollar General.

Furthermore, both the labels are good in providing you with promotional deals all the time of the year, with these only increasing and improving the timer festivals and occasions, but when compared – Walmart offers 3 to 5 deals and Dollar General has 2 to 3 deals to offer on regular days.

All the points highlighted in the above article must tell you what kind of labels are Dollar General and Walmart. It is clear that Walmart is our winner, but let’s not forget that Dollar General still has a good reputation in the market, among thousands and thousands of customers across the US.

In conclusion, in case you did not find anything you were looking for in the Walmart – then Dollar General is still a good option to go for.

With this, we have successfully concluded our Dollar General vs Walmart comparison battle, and hope it has now become easier for you to decide between Dollar General and Walmart.

Is Dollar General cheaper than Walmart?

No, according to our research and reviews by customers who have tried both Dollar General and Walmart, Dollar General is not cheaper than Walmart and has about 2% higher prices.

Which is better: Walmart vs Dollar General?

Walmart is better than Dollar General for a good set of reasons including better quality, cheaper products, and a huge variety of categories and products to choose from.

Is Walmart cheaper than Dollar General?

Yes, according to our comparison with the help of updated prices from both labels in January 2023, Walmart is cheaper than Dollar General, although the difference between prices is merely some cents or a couple of dollars.