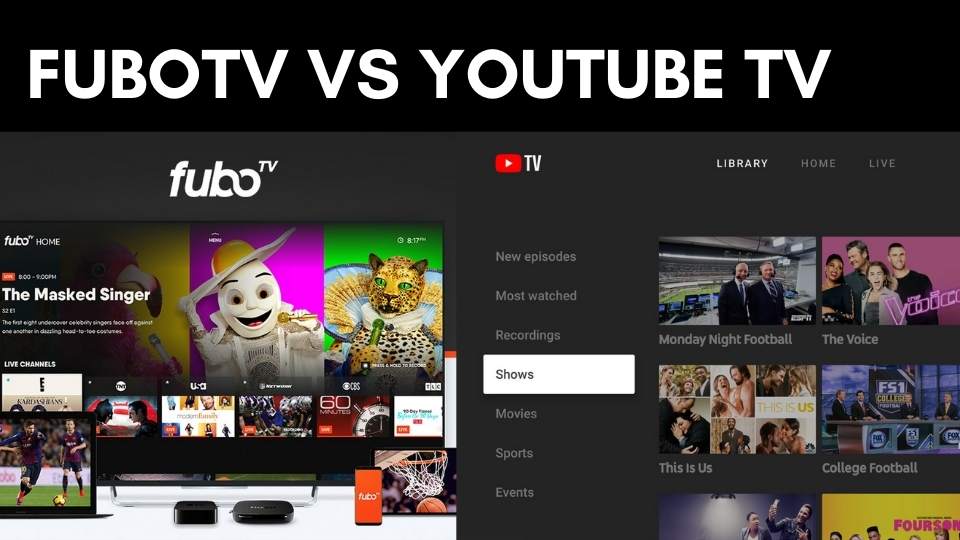 FuboTV vs YouTube TV – When it comes to live TV streaming, FuboTV and YouTube TV are two of the most common options for cord cutters. Both alternatives have a large range of live TV channels at a fair price, making them almost identical. At the same time, they each have their own set of benefits that will appeal to different audiences.

The sports-focused streaming service FuboTV, as we stated in our FuboTV analysis, offers you access to a broad variety of sports channels. At the end of 2019, it had almost 316,000 paying users. Youtube TV has grown in prominence in the industry thanks to its extensive channel lineup and unrestricted cloud DVR storage. It had also surpassed 2 million members at the time of our Youtube TV analysis.

For cord cutters, FuboTV and Youtube TV are two of the most common live TV streaming services. Although FuboTV is well-known among sports fans, YouTube has features such as a limitless DVR that audiences enjoy. We will break down the distinctions between these two providers in this article to help you determine which is best for you.

Because it did not carry ESPN, many cord-cutters overlooked sports-focused FuboTV in the past. However, it now does.

It is another multichannel video programming distributor that offers various service options with several channel lineups along with the base package (100+ channels) and add-on packages like Latino Plus, Extra Sports Plus and Portuguese Plus.

Fubo TV offers simultaneous streams as part of its base subscription package and it offers features like pausing and unpausing live streams, Cloud DVR storage and lookback of previously aired content for 72 hours.

Furthermore, it has few upgrades which are not included in the standard package by default, however, they can be added separately. Its Cloud DVR Plus costs $2.50 every month thus increasing your save space to 500 hours.

As most video streaming services mainly focus on-demand and original content, YouTube TV entirely replaces the cable subscription by offering over 85 channels of sports, news and entertainment in just one package.

It offers a cloud-based DVR service with limitless storage which saves recordings for nine months. Subscriptions can be shared among over six accounts and lets you to three simultaneous streams.

Just like Fubo TV, it also offers 4K live streams. The DVR works completely well and it has the ability to rewind and fast-forward easily through the recordings.

It is compatible with streaming boxes, mobile devices, smart TVs and computers. Unlike Fubo TV, YouTube TV provides parental controls that can protect young viewers from watching or looking for mature content.

The user interface on FuboTV is sleek and elegant. Tabs to view your home screen, recordings, and TV guide can be found on the menu. There are also tabs for movies and series, as well as sports material.

Except a few small differences here and there, this gui is fairly standard across all platforms. The mobile app, for example, would have a “Entertainment” tab that will enable you to watch movies and shows. Your videos can be found under “My Fubo.”

Past cable providers can recognize the TV guide because it is laid out in a standard grid format.

Its Guide tab features the cable-like grid with a vertical list of networks and horizontal times. The Recordings tab has all the shows and movies that you’ve recorded as well as shows how much Cloud DVR storage you’ve utilized.

The YouTube TV gui resembles the YouTube website and smartphone in appearance. It has a simple and elegant interface that is easy to use. You can switch between the Home, Library, and Live tabs using the top menu function.

The Home tab is where you can find new things to watch and Youtube TV makes recommendations based on your previous viewing habits. You can conveniently browse your stored material and even display your planned recordings under the Library tab. The Live tab allows you to view live TV channels as well as new and existing programming.

Although the interface is fairly uniform for all platforms, the Live tab is where you can see the most differences. Under this tab, the web gui shows the currently airing show as well as the next in line. In the other hand, you can just watch what is now airing on a mobile. The smart TV interface is the best because it shows what is on for the next few hours.

Youtube TV and FuboTV are two of the most expensive streaming TV providers after price hikes in the summer of 2020.

The subscription package on Youtube TV costs $64.99 a month, while the Family plan on fubo costs the same. FuboTV’s $59.99 Standard package will be discontinued in December 2020.

Unlike cable and satellite TV, these subscription channels do not charge extra for items like delivery, facilities, area sports, or cancellation.

Both Youtube TV and FuboTV give a free week-long trial period. This is not something you get with television!

There is also a $19.99 upgrade is available, which adds on Dolby Digital support, offline downloads, 4K and limitless simultaneous streams.

Just like many top live TV streaming services, both FuboTV and YouTube TV are compatible with various devices. Here is a comparison table of supported devices:

Although fuboTV started off completely dedicated to sports, you’ll still be able to find all other genres that you’re used to with the cable. fuboTV channel list is amazing, however YouTube TV does give a strong competition.

Even though you see that YouTube TV has fewer channels than fuboTV, it consists of various sports networks and all major networks. Keep on reading to know more information about fuboTV and YouTube TV’s content and channels.

FuboTV service offers options with various channel lineups, including the base package, with 100+ channels, and add-on packages like Extra, Sports Plus, Latino Plus and Português Plus. Below is the list of channels that are included in the FuboTV.

Below is the list of channels that are included in the FuboTV’s add-ons:

What is the best subscription service for you- FuboTV vs YouTube TV?

With that said, FuboTV has a larger channel lineup, while Youtube TV has more advanced functionality. In our FuboTV channel list, you will learn more about the whole FuboTV roster. Then, to see the big variations, compare it to our Youtube TV channel list.

FuboTV makes more sense for people who want to watch hundreds of live games from national and international sporting competitions because it is a sports-focused streaming service. Youtube TV is the perfect option for those looking for a complete live TV streaming solution with a powerful cloud DVR.

If your cable TV subscription includes 150 to 200 channels, YouTub or Netflix will have approximately half of that.

In the summer of 2020, these two live TV subscription providers made significant updates to their channel lineups. Here’s what you should be aware of:

On June 30, Youtube TV added ViacomCBS networks to its lineup. BET, CMT, Comedy Central, MTV, Nickelodeon, VH1, among others are among them.

On August 1, FuboTV added Disney networks to its lineup. ABC, Disney Channel, ESPN, SEC Network, ACC Network, FX, and others are among them.

TNT, TBS, CNN, Cartoon Network, and other Turner networks will be removed from FuboTV in July 2020.

Both of these networks cater to sports lovers, but they also have a good selection of news and entertainment channels.

The cloud DVR on Youtube TV is the best in the live TV business, and it is much better than the Family plan on FuboTV.

You can watch on your tablet, screen, or television with Youtube TV and FuboTV. They are both compliant with Roku, Amazon Fire TV, Apple TV, and Google Chromecast, among other streaming video devices.

Try purchasing a Roku Express if you do not already own a digital media player.

Roku Express is a low-cost digital video player with a one-time purchase price of less than $30.

Customers on Youtube TV and FuboTV’s Family plan will watch on up to three platforms at the same time. FuboTV charges an extra fee for the ability to watch on up to five screens at once.

FuboTV offers a variety of plans, starting with the famous Family bundle, which costs $64.99 per month and includes over 100 channels. Subscribers can pick from a variety of add-ons after selecting a base kit, like Sports Plus for NFL Redzone.

When it comes to FuboTV vs Youtube TV, both are two excellent alternatives to cable television.

The latest price spikes, on the other hand, are aggravating and may reduce the savings from c.