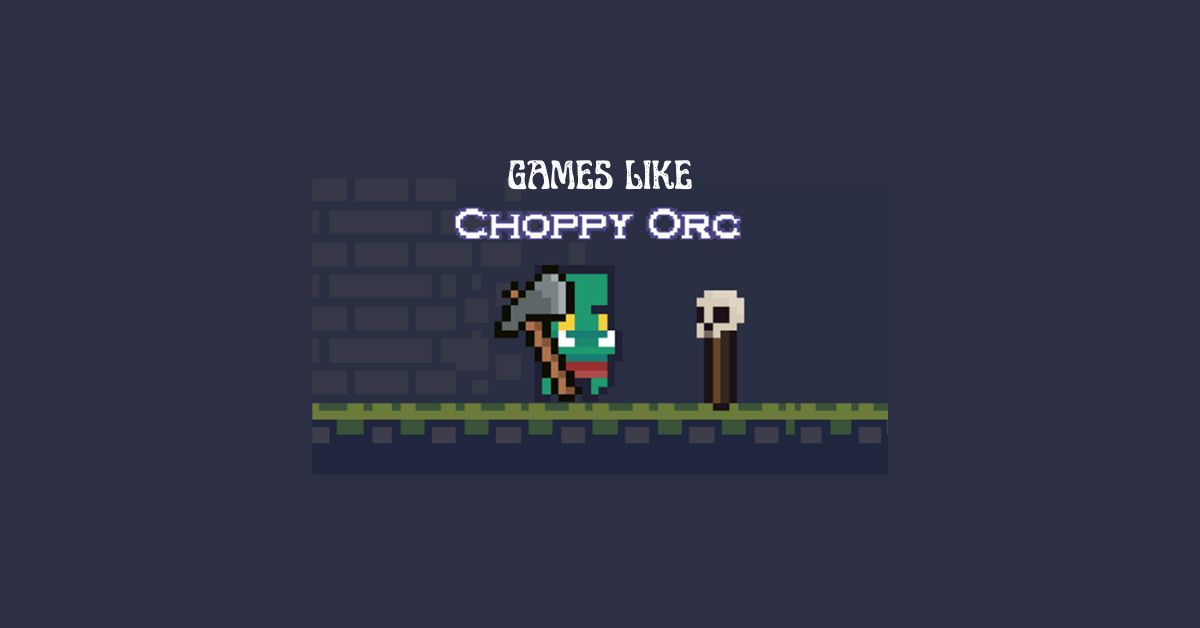 You don’t have to keep playing the same character in the Choppy Orc game when there are many other games like Choppy Orc where you can do a good pack of new things.

On top of that, you don’t have to go anywhere to find them since we have mentioned a well-curated list of Choppy Orc in the article mentioned below.

Choppy Orc is a game which involves orc who tries to solve all his problems with the help of his axe. You have to make use of your strategy skills and with the help of reflexes help the Choppy Orc to open every chest on different levels.

Hasty Shaman is an online game about a Shaman who likes to shift his way out through the land. The evil forces in the game have captured some innocent people and you have to help the shaman get them out of the treasure chests.

You can decide on your strategy accordingly and save those harmless people each time to complete the level. But, the catch is that the Hasty Shaman can go through any wall except the grey walls.

While you level up, you will be introduced to several new resources in the game. Even though the designs and vibe will stay the same, with the help of new resources you will get to play with ease and solve puzzles faster on hard levels.

Hasty Shaman can also be called one of the good games like Choppy Orc because of its similar outlook and gameplay.

Sticky Sorcerer is a platformer game which includes a Sorcerer who likes to stick himself on things, especially ogres. You have to help the sorcerer move into an unknown creature and take control of it to walk towards the chest and lock the monsters in it.

The game involves you running your brain and creating a way to win against the monsters. You do not have to fight against monsters but rather have to somehow push them into the treasure box to complete the level.

While you are hooked up on monsters, you also have to make sure you do not jump into the fire on the land nor bump into any knives above your heads on the ceiling which can also pop out from the side walls and when you get through all these hurdles, the level will be a success.

Greedy Mimic is a simple platformer and speedrun game like Choppy Orc that involves a mimic who loves to lick others and transfer them into ogres.

The story of the game talks about how the villagers have been hiding their true ogre forms. To reveal the villagers’ true forms, you have to help the Greedy Mimic grab its villagers by his tongue and lick them to remove their clothes. You can also grab other enemies who are not exactly ogres but are still harmful to create new effects.

But, it won’t be easy as you reach tough levels as the treasure boxes will float in the air between knives and fire popping out from all 4 sides.

This will be the time you will have to make a super good strategy and get accurate with your jumps to reach the quest box without bumping into any flying monsters and ogres around it.

One Trick Mage is another platformer game with Mage being the protagonist. As mentioned in the title, Mage is able to do only one trick at a time. He is required to cast spells with the help of potions but the catch is, when he casts a new spell, he will forget about the last one.

The story of the game is clear, the Mage has to cast spells by finding different potions and opening the treasure boxes to save the people trapped inside.

Unlike other games like Choppy Orc mentioned in this article, One Mage Trick does not involve one-way victory.

Although the knives and fire are still the same hurdles he has to go through. But first, he has to reach the potion.

The way to reach the potion is the easiest but once he is ready to cast a spell, that is when the real line of hurdles appears.

Controlling your character to help him or her win the level is an old concept. However, in the Sleepy Knight game, your character will not be under your control.

Like the title suggests, the main protagonist in the game will sleep throughout the game, even after you wake him up he will run while half asleep. Your job will be to wake him up right before he runs into big trouble and complete the level swiftly.

As soon as you click on the knight, he will wake up but will start running in whatever direction he is facing. While you can change the way he is facing as he is sleeping, you’ll also have to make sure he reaches the magic potion to receive his special powers to complete the level.

But, to get near the potion and treasure box, you will have to face flying monsters and fire on the surface. Luckily, the game does not involve the scar knives coming out of different places so you can complete the hardest level with a proper plan and timing.

As a player, you will accompany Fireboy and Watergirl on their journey and watch how they make use of their brain to put together wonderful strategies and pass through all the difficult traps and threats with their superpowers.

And the fact that you might have already guessed, the highlight of the game is that Fireboy can burn himself as many times as required but can not handle water at any point. Similarly, Watergirl can dive into the depth of the sea and easily handle water but fire is just out of her league.

So, the main task for you is to help them whenever they fall into a trap of hot lava or a huge hole accordingly and win the level with them. In case you can’t handle all this on your own, you can always opt for the two-player mode and ask any friend to join you in Fireboy and Watergirl’s fire and water journeys.

Here we are ending the list of games like Choppy Orc. Choppy Orc itself is a fun game and you can play it whenever you are free as it will not require much time to finish a level if you use your brain properly.

Nevertheless, the other Choppy Orc alternatives noted in this article are worth a shot too. Most of the games have similar gameplay and views as Choppy Orc but all of them have diverse ways to help you have utmost fun in playing.

What is the world record for Choppy Orc?

The current world record for the speedrun Choppy Orc game is 119.430 seconds.

How do you double jump in Choppy Orc?

Discloure: ViralTalky is supported by its audience, when you buy through links on our site, we may earn a small commission.
Contents hide
1 Hasty Shaman
2 Sticky Sorcerer
3 Greedy Mimic
4 One Trick Mage
5 Sleepy Knight
6 Fireboy and Watergirl
7 Final Words
8 Frequently asked Questions
8.1 What is the world record for Choppy Orc?
8.2 How do you double jump in Choppy Orc?