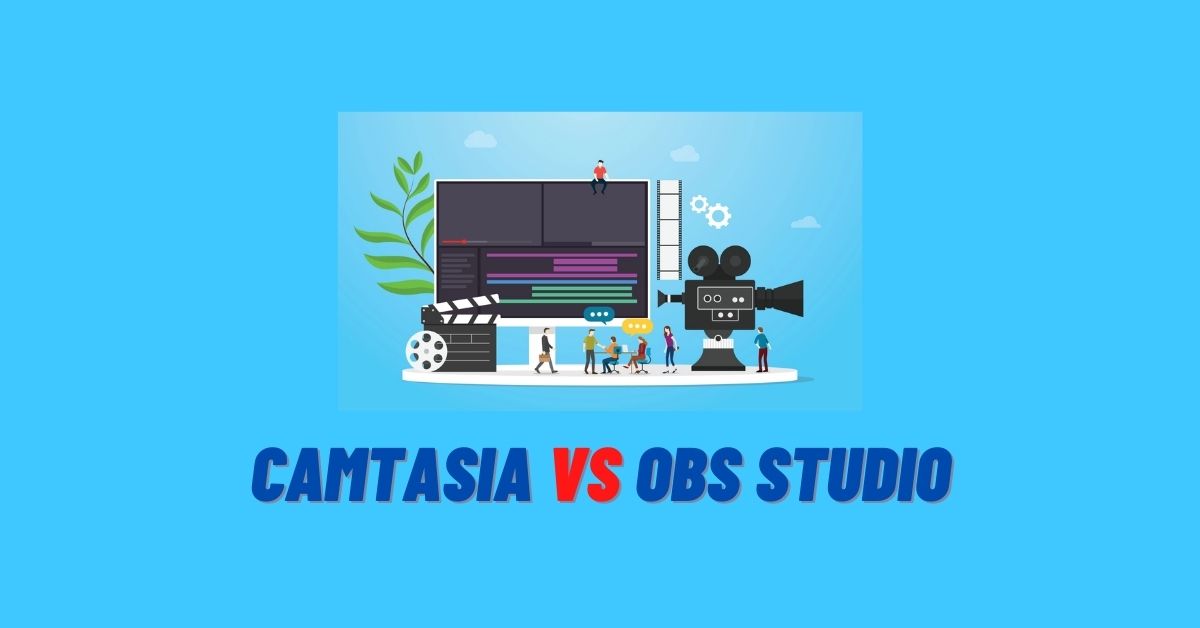 Camtasia vs OBS Studio: Recently, several people wish to share their current experiences and content with others. In order to record their screen, they frequently use screen recording software. The two most well-known similar apps among these are Camtasia and OBS.

But there are significant distinctions between Camtasia and OBS Studio, two of the most well-known screen capture and video recording applications. If you’re looking for which one is the best recorder? we’ll give you a quick comparison of OBS Studio vs Camtasia in this article so you can decide which is ideal for you depending on your needs and requirements.

So, continue reading this article to learn about the features, pricing, pros, and cons of Camtasia vs OBS Studio and to see a full comparison of which one is best.

One of the best screen recorders is Camtasia, which enables you to create accounts using Microsoft PowerPoint’s direct yearly feature.

It is widely used for instructional films, demo videos, webinars, YouTube, training videos, recordings of meetings and presentations, and much more. You can quickly edit your films with its built-in video templates, which cut down on the time required.

And for a polished, professional look, you can customize any of the royalty-free Camtasia library components and include them in your film. To acquire flawless audio for your video, you can record and edit your audio clips using a microphone, any sound from your computer, or imported clips.

Not only that, it also includes a resource collection that serves as a starting point for creating vibrant recordings. And its creative video editing tools will let you edit videos and add effects, edits, and other elements.

OBS Studio is a Windows, Mac, and Linux device-compatible on-premises video recording and live-streaming solution. It is a visual mixing program that gives you complete control over your graphics in terms of scaling, designs, movements, adding overlays, and many other factors.

It has the ability to broadcast live streams on numerous sites, including Twitch, YouTube, and others in addition to recording the screen. You can record live audio and video content with OBS Studio. And when creating interactive video projects,  mix specific audio and recordings using the editing tools.

Furthermore, you can use a variety of sources and material to produce videos, including camera footage, uploaded photographs, text annotations, and recordings. And in order to assist you in editing audio files, an audio mixer program also incorporates filters like noise gates and noise suppression.

Essentially, Camtasia consists of the editor and the recorder, two programs that operate in perfect harmony. Here, as an editor, you’ll polish and shape your story.

You can record screen-based content from your computer, as well as sound from your webcam, microphone, and other computer devices, using the Camtasia recorder.

So both, Camtasia’s and OBS Studio’s user interface is intuitive, simple and really easy to use.

Although Camtasia has tools for post-production use, these tools aren’t nearly as innovative as those found in other video editing programs.

On the other hand, OBS doesn’t emphasize post-production tools but does allow consistent integration with other real-time video software programs. And by utilizing appropriate software, you can add effects, advancements, and various components to OBS.

Camtasia doesn’t have a live streaming feature, thus it must be useful for pre-recorded videos or screen recording. OBS, on the other hand, gives you strong live streaming capabilities.

Camtasia demands payment for use, whereas OBS provides source code that is free to use, modify, and distribute.

OBS and Camtasia are two entirely different tools with distinct uses. The ideal option for you is Camtasia if you’re seeking for a solution to generate expert eLearning content. However, OBS is the best tool for the task if you’re searching for a straightforward screen recorder or live-streaming program.

Camtasia has a per-license pricing structure providing savings in the school, non-profit, and government sectors.

Each license costs $249.99 up front for both private people and for-profit companies. And $223.99 up front for governmental and nonprofit institutions. The onetime cost of each license for educational organizations is $169.99. Nonetheless, discount pricing is available for bulk purchases of five or more licences.

While OBS Studio is open-source and available for free download. You can also check here for more about pricing.

Camtasia vs OBS: Which is better?

Both Camtasia and OBC Studio are similar screen capture and video recording programs but they have a few key differences.

OBS Studio, on the other hand, primarily takes care of your live streaming requirements and enables you to upload your video content to websites like YouTube or Twitch as it is being recorded.

Is Camtasia Better than OBS Studio?

So, the ideal option for you is Camtasia if you’re seeking a solution to generate expert eLearning content. However, OBS is the best tool for the task if you’re searching for a straightforward screen recorder or live-streaming program.

It can be difficult to choose the best screen recording software that is both free and cross-platform streaming compatible. And it entirely depends on your needs and preferences.

Nonetheless, it’ll be beneficial to determine whether your system setting is compatible before purchasing any screen capturing software. Thus, we hope the above comparison on Camtasia vs OBS has helped you choose the best option for your requirements.

Is Camtasia better than OBS?

Why is Camtasia the best?

If you need great screen recording software, then this is it. The easy video editing built in makes it useful for videos recorded in other platforms and being able to export in formats supported by YouTube and most e-learning platforms makes it easy.

Is Camtasia worth buying?