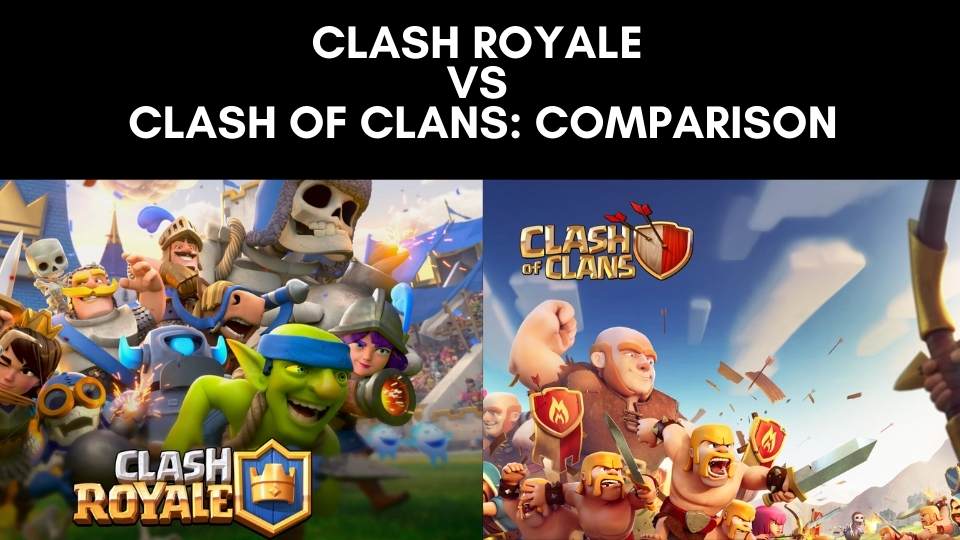 Clash Royale and Clash of Clans, both are from the same makers. Both titles are mobile free-to-play game, you can simply find it on app store without having to spend a time. In face, you can play forever and don’t have to worry about money.

The world they belong to are set in the same fictional universe and even on some occasions, you can clearly see them colliding. This means if you are in Clash of Clans, you can probably take a plane over to Clash Royale. So, what’s makes them different? Even though they look similar, they are completely different and are managed by different teams.

Clash Royale vs Clash of Clans: What are they?

Clash of Clans is a strategy action game, the basic sense of the game is that you build your own village and try to defend it as much  as possible.

Conflicts are also a theme in COC as you can get attacked by real-world opponents, unless you’re still in the tutorial where you’ll get attacked by goblins. So, ensure that you’ll spend a lot of time making your village  strong and building an army for defensive purposes.

Clash Royale, on the other hand is a tower defense game where you play against the real world opponent. The game also has elements of collectable card games and multiplayer online battles.

Every update of Clash Royale is more interesting as Clash of Clans, as it has new game model, challenges, emotes, war models, and tower skins. Every 3-4 days you get to play new challenges and game mode. Whereas, in Clash of Clans, you can be able to upgrade your base and units using the resources you have earned or collected from the collectors and wait for eternity for your army to get worked.

COC is pretty old and every year it gets something that make it rise up to the torch, that is why the game is still alive. So, even though they go without update for some months, they’re going to come back with something good.

Whereas, Clash Royale on the other hand has been out for two years and had great updates like tournaments, new arenas and a lot of new challenges. Unlike Clash of Clans, Clash Royale is more skill-based game.

In Clash Royale, you can just casually play one-on-one without having to wait to request any troop. You can just play as many time you can if you want to. There’s also two vs two gameplay, which you can play with your trusted clan mates. On the other hand, Clash of clans is not a game that you can play casually. If requires your commitment, patience, and time. You should join a clan, so you can request troops and play multiplayer to update your base.

Both the games are slow in their own way. In Clash Royale, players who started playing since launch are already at level-11 with 4000 trophies and have all cards, and that is without spending a single dime. Whereas, in Clash of Clans you’ll not even max at least level-9 in two years and not have all the defenses or heroes unless you rush.

All the games definitely have some problems or issues. Clash Royale problems are far known and even after two years sometime the team just can’t get those issues fixed. Clash of Clans on the other hand has problems like game mods, cheating, and matchmaking problems.

There’s no doubt that both games are working hard to maintain themselves upright. Even though we’ve updates that seems to disappoint us, we can all agree both the teams are doing their best. Though both of these games has similar characters and similar environment, still there is a difference between the gameplay. I hope the above article on Clash Royale vs Clash of Clash have helped you known their similarities and differences.