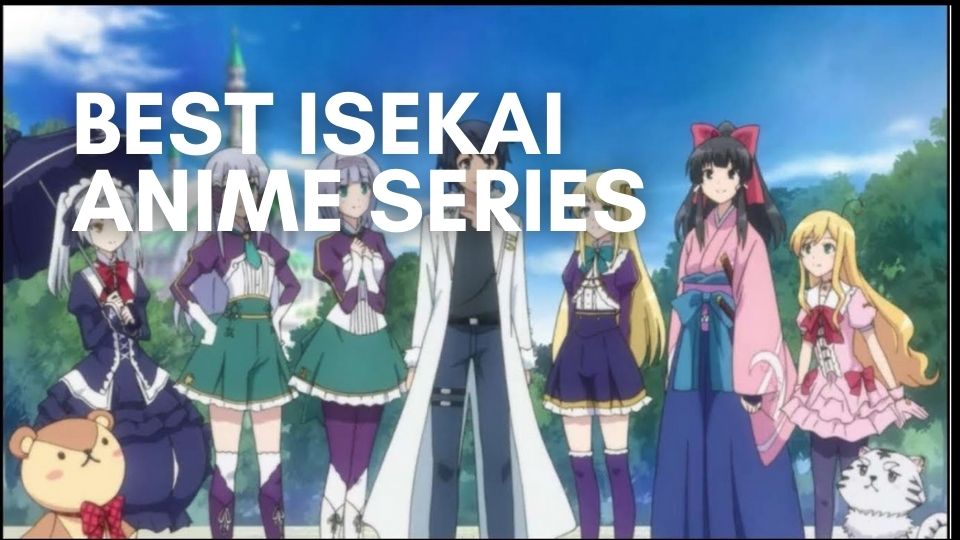 Are you wondering what are the Best Isekai anime series out there? In this article, I’ll show the best twelve Isekai anime series you can watch. If there is one anime genre which is quite interesting and amazing, it’s Isekai. If you are unfamiliar with this term “Isekai” I’ll tell you what it actually means, it is a Japanese word which translates to “otherworld” or “different world.”

It is a genre of Manga, light novel, Anime and video games which revolves around the protagonist that is transferred to another world and is supposed to survive there. This genre allows people to learn about the new world at the same time as the main character. Isekai works often comes under science fiction, fantasy, accidental travels or portal fantasy genres.

Look out the guide below on 12 best Isekai anime series

It is one of the best Isekai anime series that I’d recommend. It has a lot of comedy, magic, romance, action, and at times it is really dark. Subaru Natsuki  was only trying to get to the convenience store but he gets wounded up and summoned to another world. Soon after being summoned to a new world, protagonist Subaru Natsuki and his new female friend are brutally murmur. After he awakes, he find himself in the same alley, the same girl with the same thugs and the day begins to repeat. Its got everything you could possibly want from an anime.

The Rising of The Shield Hero

The Rising of The Shield Hero is one of the best Isekai anime series around. It was originally published as a web novel and later it began anime series that started airing during the winter 2019 anime season. Naufomi Iwatani, an uncharismatic Otaku who spends his days on manga and games, suddenly finds himself summoned to a parallel universe. He find out that he is one of four heroes  who are equipped with legendary weapons and are given responsibility of saving the world from its destruction. Naofumi is soon betrayed, alone, and penniless. With nowhere to run, and no one to turn to, he is left with his shield. Now, Naofumi is supposed to rise to become the legendary Shield Hero and save the world.

That Time I Got Reincarnated as a Slime

That Time I Got Reincarnated as a Slime is a strong mix of action and humor and is considered as one of the best Isekai anime series. When a 37-year-old Tokyo salary man dies and wake up in a world of dragons and magic, he’s a little disappointed to find he’s become a blind, boneless slime monster. Mikami’s middle age doesn’t gone as he imagined, he got stuck in a dead-end job, he never found a girlfriend, and he was brutally stabbed to death in the street at 37. So, after he woke up in a new world straight out of a fantasy RPG, he’s disappointed but not really surprised to find that he’s not a wizard or a knight but a blind slime demon. However, there are chances for even a slime to become a hero.

Overlord has a majestic feel of a person sent to another world having a great power. The protagonist while unrivaled in power, has many troubles in his mind, the story allows you to understand with a hint of comedy. Momonga, an over powerful wizard and master of the guild Aniz Ooal Gown, decide to spend his last few days in the game, as the server starts to shut down. To his surprise, despite the clock having struck midnight, Momonga is still fully conscious about his character.

No Game No Lie

Shiro and Sora, who happens to be siblings, together make up the most feared team of pro gamers in the whole world, The Blank. When they manage to beat god himself in a game of chess, they are sent to a world where all disputes, conflicts, country borders and even people’s lives are solved and decided with the games and competitions. Always ready for a challenge, the siblings quickly take up the obstacles which come their way, whether it be helping influence who will be the next king or restoring humanity’s good name compared with the other races.

The Devil is a Part-Timer

The Devil is a Part-Timer is one of the best isekai anime series that is based on Satoshi Wagahara’s novel series of the same name. This comical story revolves around a Satan aka the demon lord turned to a fry slinger and follows the daily travails of a former Devil King Sadao Maou and his general Shiro Ashary as they overcome the complexities of life in modern-day Tokyo. They’ve been banished to earth and are stripped of magical power after suffering an utter defeat at the hands of a plucky hero. As if this wasn’t enough, the pesky hero is still hell-bent on finishing the job.

Sword Art Online is one of the best Isekai anime series to come out in recent years. Yuuki Asuna, before borrowing her brother’s virtual reality game system and getting trapped in Sword Art Online, was a top student who had spent her days at cram school and was preparing for her high school entrance exam. As time passes, Asuna fears what will happen to her life outside the fantasy realm. Unwilling to wait on the sidelines for more experienced gamers to beat the game, she tries to employ her study habits to learn the mechanics and techniques of the game.

In Other World With my Smartphone

In Other World With my Smartphone follows the story of a boy who is accidentally killed by the god, is retrieved in another world as a compensation with his magically advanced smartphone being only the first of his gifts there. As meets all kinds of new people and forges new friendships, he ends up learning the secret of that world. He inherits the legacy of an ancient civilization and works with the kings of some laid back countries.

Toyohisa Shimazu is the rearguard for his retreating troops, and is critically wounded when he suddenly finds himself in a new world of magic, full of hobbits, dragons, orcs, and elves. Inside this world of wonder and magic, there is a great war being waged by using various warriors from human history as chess pieces in a bloody endless battle, with the fate of the world in the balance. Quickly befriending the ancient archer Yoichi Suketaka Nasu and the infamous warlord Nobunga Oda, he learn about the political unrest tearing through the continent.

The Saga of Tanya The Evil

An elite salary man reborn as a little orphaned girl with nothing to her name but memories from past life and is destined to become the most dangerous sorcerer in the imperial army the world has ever seen. Tanya will do whatever it takes to survive, even is she can find it only behind the barrel of a gun. High above the mud and blood soaked trenches, she pits herself against army mages in high stakes aerial duels with bayonets, bullets, and spells. She is not really evil, and she is not a saint, Tanya acts in her own best self-interest and figure out how to excel in a new universe.

Gate is one of the best isekai anime series out there that will immediately hook you up with just its premise.  Gate, a mysterious portal suddenly appears when off-duty Japan Self-Defense Forces officer and otaku, Youji Itami, is on his way to attend a doujin convention in Tokyo. From this gate, warriors clad in medieval armor and supernatural creatures emerge, charging through the city, destroying and killing everyone in their path. With swift moments, Youji tries to save as many live as he can while the rest of the JSDF direct their efforts towards stopping the invasion.

In the world of MMORPG, I think no other isekai anime has captured as Log Horizon did, where 30,000 Japanese gamers are taken from their everyday lives into the world of popular MMORPG. Among them, a college student Shiroe, whose shock and confusion lasts only for a moment. As being the veteran of the game, he immediately gets out to explore the limits of his new reality. He must learn to live in this new world, by leading others and by negotiating with the natives in order to bring stability.

Even though there are many Isekai Anime out there, I have only mentioned 12 best Isekai anime series which are definitely worth watching. I hope this article might have helped you  find some best anime series.