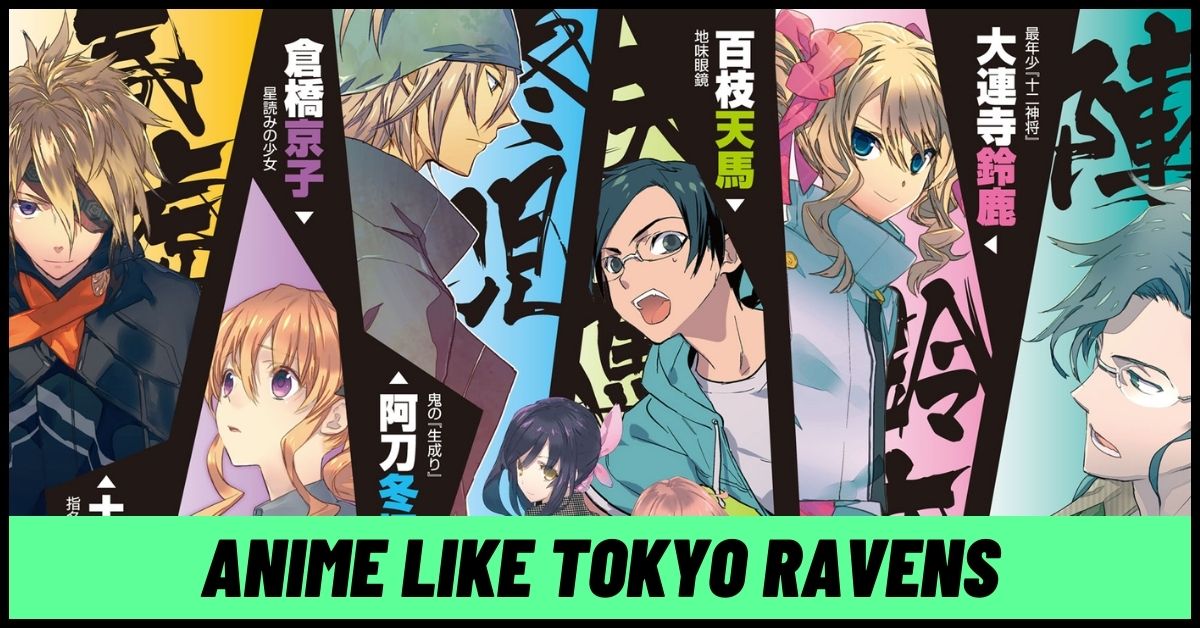 Anime like Tokyo Ravens: The Action genre in anime speaks a lot of stories, struggles, and challenges. Likewise, it can be combined with romance, comedy, and supernatural themes to give some really good shows, maybe some anime similar to Tokyo Ravens.

Tokyo Ravens started when Japan invented a powerful technique named Onmyoudou magic, to be used during the second world war to gain the upper hand and establish itself as a tough country.

However, it didn’t take a while for the plan to backfire as the technique then caused a great spiritual disaster – an event that infected Tokyo and still does to this date.

For the same reason, the Onmyou Agency was established to exercise all the spiritual disasters and fight against the demon that may enter the world.

Now the same Onmyoudou has developed into a rather simplified mode of magic used widely for different applications such as technology and medicine.

But, not everyone can use its magic entirely and the same is the case with Harutora – a member of Tsuchimikado’s branch family. He has no mastery and has chosen a normal life.

But when another person from the agency tries to experiment with the technology, it leads to Japan’s failure again – Harutora finally decides to make use of his life. Tokyo Ravens has action and the school theme just makes it even better.

Code Geass: Lelouch of the Rebellion story takes place in the year 2010 when the holy empire of Britain is planning to establish the country as a dominant military nation, beginning by conquering Japan.

Japan is further renamed Area 11 after its smooth defeat and has been resisting the cruel rulers of Britain since then.

Lelouch Lamperouge is a great anion student who gets caught up in a battle between Jabon and Brittania rebel forces. He is successful in escaping thanks to a mysterious girl named C.C. appearing at the perfect time – who granted him the power of Geass, also known as the power of kings.

The boy soon realizes the vast potential of his new powers and thus, embarks on a journey to save Japan and get his revenge once and all – all this while becoming a mysterious masked man known as zero.

Jujutsu Kaise starts with Yuji Itadori, a normal high school boy who spends his time indulging in regular school activities – to be specific, groundless paranormal activities with his club.

Days go by normally until one night when his grandfather speaks to him for the last time, utters some really meaningful words, and dies. Then he meets Megumi Fushiguro, and the boy explains to him about curses.

At the same time, his club members have unfolded a finger, without knowing that it is a cursed object belonging to the king of curses – demon Sukuna Ryoumen. Since cursed objects seem to be attracting other curses, the finger does the same and the members are attacked.

Megumi and Itadori run to the school but when the things go out of hand – Itadori decides to sacrifice himself by eating the finger and letting Sukuna enter his body.

As expected, Sukuna is out in the open but to everyone’s surprise – he is controlled by Itadori. Itadori can control his soul and he can swap whenever he wants with Sukuna.

The story goes on with many main characters still entering the series like Gojo Satoru and Kugisaki Nobara.

Jujutsu Kaisen further follows Itadori, Megumi, and Nobara as they go on several missions to kill curses and get involved with many other things – while being guided by their goofy ‘sensei’ – Gojo.

Assassination Classroom talks about the story of all the students of 3 – E, more like the dropouts and delinquents from the Kunugigaoka Middle School.

The students have no interest in becoming elites but just want to advance in academics – to the extent that they will be allowed to study in the original school premises, instead of in the ruined school in the mountains.

But, while studies are still the top priority, they are given a unique task by the national government – to kill the now greatest threat to earth, their new homeroom teacher.

The same person has destroyed half of the moon and he is like an octopus – Koro sensei who is threatening to destroy the Earth by March of the following year.

In this mission, students are supposed to kill him at every chance they get, or the earth will vanish. The story further follows a good set of comedy moments and heartwarming scenes including the kindest teacher and his lovely students.

Kekkaishi talks about a world where supernatural and evil creatures enter the world frequently for different purposes. The story includes Yoshimura Sumimura, one of the Kekkaishi, an individual who himself has supernatural abilities but instead of doing evil things, he’s responsible to destroy all the evil creatures.

The demons and evil creatures, especially the ones who seek power emanating from the land of Karasumori – the same place where Yoshimura’s high school is located.

The main goal of Yoshimura is to find these creatures and protect his school and hometown – when in reality, he’s the least bit interested in fighting against the ugly creatures and would rather be baking a cake right now.

Fortune Arterial: Akai Yakusoku narrates a deal involving a male protagonist named Kohei Hasekura, who is transferring to a prestigious public school that includes the style of an English six-year school including junior high and high school students.

The highlight is that the school is located on an island called Tamatsu, offshore from mainland Japan and the only way to get to the school is by boat.

Right after transferring into the school, he discovers that the neighbor next door, from the same class as his, is Sendo Erika – a vampire.

It has good action with enough scenes for romance and comedy – making it one of the must-watch anime like Tokyo Ravens.

Date A Live starts when 30 years ago, a phenomenon struck the Eurasian continent resulting in its devastation which also involved space vibrations from an unknown origin.

This resulted in the deaths of over 150 million people. Since then, earthquakes have been distracting the world frequently on a large scale.

Shidou Itsuka seems to be a normal high schooler living with his younger sister named Kotori. One day, the same earthquake threatens the city they’re staying in and the boy rushes home to save her sister but instead gets involved in the eruption.

Trying to escape, he then discovers a strange girl at the source of the earthquake – who seems to be a spirit from another world causing the earthquake.

Further in the story, you will find out that between the spirits and anti-spirit team, there is one more party who is trying to save these spirits for their use and to everyone’s surprise – the party is controlled by Shidou’s little sister.

Dog Days involves the world of Flonyard, an alternative to earth with its creators resembling humans, but the highlight is that they have extra ears and tails of specific animals.

Currently, the Republic of Biscotti, a union belonging to dog-like citizens, has received a strike by the feline forces belonging to Galette Leo Knights.

To save Biscotti, its Princess Millhiore summons a champion from a different world to defend her people. The champion turns out to be a normal junior high school from Earth planet named Cinque Izumi.

After understanding the situation, the boy regains a weapon named Palladion and starts preparing for the war.  In Flonyard, unlike the human realm, wars take place without any casualties and are more like sports competitions, where the goal is to raise money for the participating kingdoms.

Cinque is successful in becoming the champion of biscotti but further learns that once a champion is summoned to this world – they can’t return to their world again.