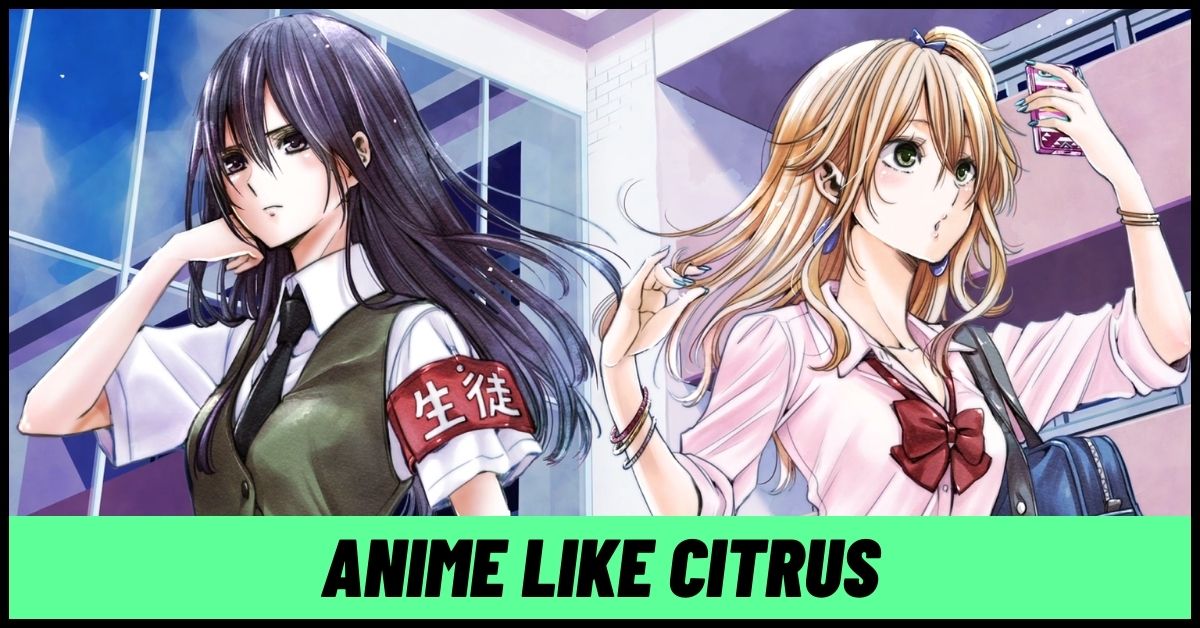 Have you always been interested in different sexuality anime like Yaoi and Yuri? If so then have you come across some good anime like Citrus, where you can find a good amount of romance followed by drama and comedy to spice things up?

It was between the summer of Yuzu Aihara’s freshman year when her mother married someone which automatically forced her to change schools.

But, since she is a sociable person, this change of events will just bring new opportunities to make new friends, find lovers, and finally experience a first kiss. But, all her dreams come crashing down when she joins an all-girls school filled with girls with just one goal – to achieve good grades.

While Yuzu figures out what to do, her unusual appearance in the school manages to grab the attention of the student council president named Mei Aihara. Apart from that, when she arrived home tired, another thing shocks her – that Mei is her stepsister.

Their relationship starts with Yuzu being friendly and Mei with the same cold-hearted aura. However, soon things start to change in Citrus, after Mei pins her to the wall and snatches her first kiss.

Citrus is a good shot if you want to start watching some different genre anime. But, if you have already given it a try and love the concept of romance and drama involved in it, then we suggest you must watch more anime like Citrus!

Don’t know where to search for them? We have a solution for that too! In the article below, we have mentioned a list of 7 Yuri anime like Citrus you can binge on overnight!

Bloom Into You first starts with Yuu Koito, a girl who is always interested in romantic shoujo manga along with the lyrics of romantic songs.

She is a patient girl waiting for the wings of love to embrace her and flatter her heart on the day when she finally receives her first confession.m

But, when one of her classmates from junior high confesses his love to her, unexpectedly she feels hollow and not interested for some reason.

Then she realizes that although she understands romance perfectly, she’s still inexperienced when it comes to feeling stuff and romance firsthand.

Currently, she is enrolled in a high school and dispirited while still contemplating how she must be responding to her suitor. While still figuring out things, she bumped into a flawless student council president named Touko Nanami – who seems to be straightforwardly rejecting a confession herself.

Wanting to be like the president, she approaches her and asks for advice but instead of that – the president confesses to her. Soon enough, Yuu discovers herself wrapped around the president’s finger – all this while setting on a journey to find the feeling that she has longed for so long

Watch Bloom Into You

The girls have opposite personalities where Yui is a shy and girly type and Tomoka is tomboyish and infamous among her classmates and friends.

Despite being different in several ways, they still try to support and understand each other while experiencing the rush of emotions from the magic of first love.

Further in the story, you can chase these two in a heartwarming tale where they’re dealing with their ever-increasing feelings for one another, while multiple concerns and obstacles continue to plague their way.

Kase-san and Morning Glories include a beautiful tale between two opposite personalities. It is a highly recommended anime like Citrus if you are new to this whole Yuri genre thing.

Adachi and Shimamura in the anime are not like the usual childhood friends but seem to be bumping into each other coincidently on the second floor of the school gymnasium.

After they met, a budding friendship seemed to strike between the two with the feelings for each other only becoming clear.

As days pass, they start to grow closer to one another day by day, and they are to travel across their differing personas while specifying the amount of affection for each other.

But, the nature of their friendship seems to be changing when one of them starts to feel something more than just a friendship bond for another.

The story further follows both girls as they are to realize if their new bond will bring joy and happiness, or only excuses and obstacles to part them.

Adachi and Shimamura start with a decent plot but contain multiple obstacles and twists further in the story – gaining themselves the title of one of the interesting anime like Citrus.

Liz and the Blue Bird

Liz and the Blue Bird shows how Liz’s lone days end when she meets a young girl in the form of a blue bird. Their bond soon blossoms but soon, Liz has to make a difficult decision to realize her love for the young lady.

Mizore Yoroizuka and Nozomi Kasaki are actually the main protagonists in the story, two high school seniors and good friends who are responsible to play the lead roles in the third movement of the story.

Mizore, the introverted one is reserved to represent the gentle Liz, while the popular Nozomi is required to portray the energetic blue bird.

But, for some reason, the distance between the two seems to grow as days pass and they eventually disappoint the audience due to their weak performances. Soon enough, graduation is around the corner and the two are still contemplating their connections and feelings for the specific characters they played in the band.

Things are still confusing but when they evaluate the same story from a different point of view, their story takes a new turn.

Watch Liz and the Blue Bird

Sakura Trick starts as Haruka Takayama and Yuu Sonoda, childhood friends, decide to enroll in Misato West High School together. Unexpectedly, they end up in the same class but with a cruel twist of fate, having the seats on opposite ends of the classroom.

On top of that, the school they are currently attending is going to close down in three years, which makes them the final batch of first-year students.

Pushing away all the unfortunate events, Haruka is determined to stick together with Yuu and create as many wonderful memories with her as she can.

But, she is left jealous in the corner because Yuu has an easy-going personality and therefore, has been attracting the attention of almost all her female classmates.

But, to make up with Haruka, Yuu shares a deep kiss with her when they’re alone in an empty classroom – the act only strengthens their bond as ‘special friends’ while new feelings and emotions for each other start to grow eventually.

Scum’s Wish actually follows Hanabi Yasuraoka and Mugi Awaya, a happy couple from outside who are sure enough that they won’t be able to get together with the actual person they love.

For Hanabi, it is her childhood friend, and the only man she has adored since childhood named Narumi Kanai. As for Mugi, he is in love with Akane Minagawa, the music teacher in their school who tutored her a few years back.

Both the protagonists have someone they love, each other and two more people in their lives. For Hanabi, she has Ebato, her senior in school, and a very good friend.

Before dealing with Mugi, she and Ebato were close friends but since Mugi made an appearance, it seemed as if he snatched Hanabi from Ebato.

Further in the story, the main protagonists don’t end up together nor will Hanabi be with Ebato. They seem to end things, the kisses and intimacy they shared on good terms but deep down, we can see Ebato still looking for an opportunity.

Scum’s Wish, like other good anime like Citrus mentioned in this article, isn’t primarily focusing on the Yuri genre. But, it contains some intense girl-girl scenes with enough drama involved to keep you entertained.

Netsuzou TRap has Yuma Okazaki and Hotaru Mizushina as childhood friends. They have boyfriends named Fujiwara and Takeda, they go on dates and spend quality time – always staying together.

Everything goes as usual until one day on a group date, Hotaru goes for an unexpected move while Takeda and Fujiwara are distracted by something else. She starts stroking Yuma’s thighs and startles the other. Taken aback by the sudden action, she excuses herself to the bathroom, soon followed by Hotaru.

Since now they are in private, Hotaru pushes the innocent Yuma into the cubicle, leans forward, and whispers into her ears that – she will be even more nervous while doing something intimate with a boy and that she can help her practice in private.