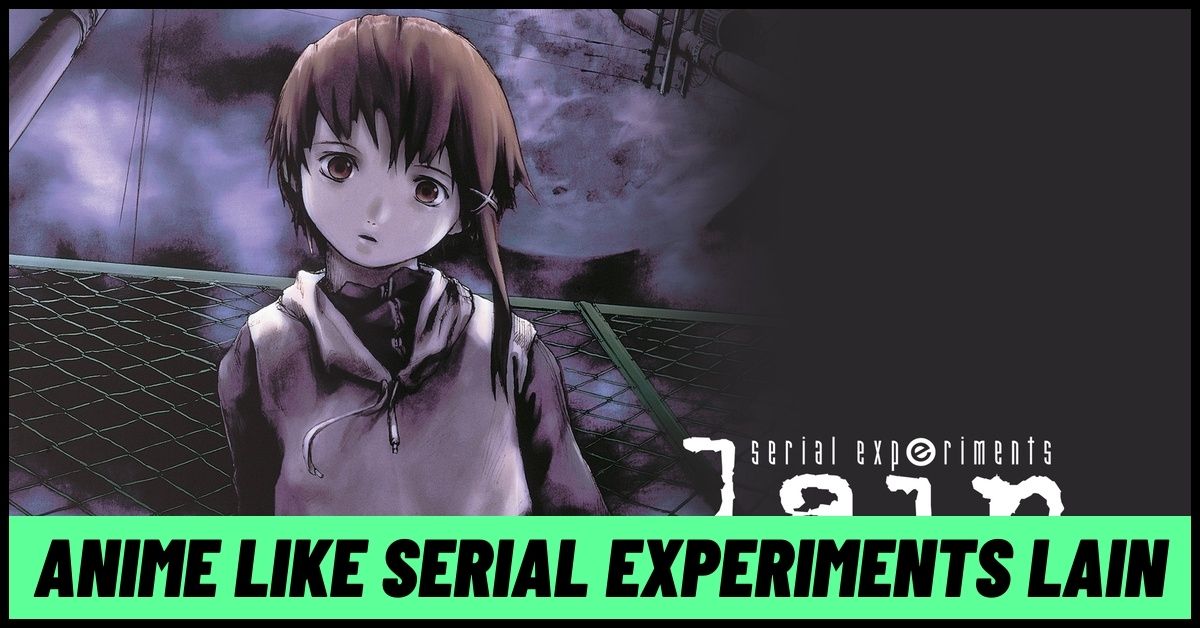 We know you are a fan of mystery, war, action, etc genres separately but how about we give you some anime like Serial Experiments Lain that contains the perfect mixture of drama, suspense, and mystery with supernatural, fantasy, or horror?

Serial Experiments Lain speaks about Lain Iwakura, a socially awkward 14-year-old girl, who, along with a bunch of other girls from her school got a weird email from Chisa, her classmate who recently committed suicide.

She is not interested and doesn’t know the basics of using technology but right after opening the email – she is transferred to a wired and virtual world of communication networks – the Internet.

Lain’s life takes several sudden turns and twists as she experiences weird things in the world – like a strange man dressed in black appearing wherever she goes, asking her strange questions, knowing more about her than she knows, and more.

Further in the story, she is pulled into more odd events and concepts like consciousness, identity and perception have new importance.

Neon Genesis Evangelion includes the story where it has been 5 years since a cataclysmic took place as the second impact and now the world is facing a new danger – monstrous creators called Angels invading Tokyo one after the other.

Humanity is finding it hard to defend itself against these angels even when they are using the most advanced technology and military tactics. But, there is one hole for human salvation that rests in the responsibility of a mysterious organization named NERV by Gendou Ikari.

NERV is popular for using huge robots called Evangelions to fight against the Angels, with advanced weaponry along with defensive barriers called absolute terror fields. Meanwhile, we have Shinji Ikari, who has been abandoned by his father for years, currently returning to Tokyo 3.

Shinji has suffered from trauma after he lost his mother and a second dose when his father neglected him to this date. The boy was terrified to talk about his problem with anyone but his personality seems to be changing after meeting a 29-year-old Misato Katsuragi, an officer working at NERV, who also shows him a free-spirited kindness he has never seen.

While still on the way to meet his father, Shinji is attacked by an angel and forced into action after his father reveals his true intentions of inviting his son back to Tokyo three.

The highlight is: Shinji is the only one who can entirely handle unit 01 Evangelion, a brand new robot that will synchronize with his biometrics. Even when he knew about his father’s dark secrets, he continued to defend Tokyo city with the help of the new robot – all while suffering from psychological trauma alone.

Haibane Renmei narrates a story of a young Haibane. She was born from a cocoon in a town with a halo and small gray wings.

She woke up in a world which is hard to understand without any memories from the past. She realizes her name is Rakka from the hazy memories and soon becomes comfortable in the strange town.

But, there are certain strict rules for Haibane – like she’s not allowed to leave the village or even go near the walls surrounding it. On top of that, more people of her kind start to disappear suddenly on the day of the flight which leaves Rakka uneasy, and others too since they don’t know anything about their species.

The story further talks about Rakka as well as others present near, as they live their lives without any memories of the past, in an attempt to gain freedom from the former pain and find salvation.

Haibane Renmei again comes with an entirely different plot line while helping you experience concepts of angels being monsters. It is one of the must-watch anime like Serial Experiments Lain because it introduces you to the scenes and things you have probably never experienced before.

Texhnolyze narrates a dark underground story in the city of Lux where people live in fear under the cruel rules of different criminals.

The gangs staying underground only interact with the outer surface through their mining project of raffia: a raison d’être of the city. The story follows a rare material only found in Lux named texhnolyze, which helps transplant human body parts with cybernetic prostheses.

The substance is to be used without triggering the immune response of the host. Also, the elusive organization that is in charge of the raffia production is handled by a special group Organo led by Keigo Oonishi, which has the authority to research the substance.

However, the balance of Lux is suddenly disturbed when a mysterious man named Kazuho Yoshii starts committing crimes – which automatically leads all the gangs into becoming rivals.

While everything is getting chaotic, new characters enter the story, Ichise and Ran find themselves included in the biggest crisis Lux has ever witnessed.

Ghost Hound begins with people noticing strange things happening in the town of Suiten. The daughter of a priest of the same town starts seeing weird visions and spirits have started to wander around the mountains, while Tarou Komori is having uneasy dreams.

The boy was traumatized when he was kidnapped 11 years ago but has been suppressing all the memories that could haunt him to this date.

However, now the memories are returning to him through his sleep and are combined with encounters that go beyond the world of dreams. In the story, you will see a psychological and supernatural mixture with three kids who are struggling to confront their demons and repair the bridge between the corporeal and spiritual world.

Boogiepop Phantom started then five years ago, a line of strange murders disturbed the city to its core and now, the rumors seem to come back. Boogiepop is a well-known name: meet her once at night and you will be taken forever.

This is the story narrated by people, they talk to each other about her and laugh, no one believing that she can actually exist in this new generation.

But, strange things continue to happen while the darkness of night is taking several forms. All this means something has to be out there, right?

Kino’s Journey includes a tale of a 15-year-old boy named Kino who loves traveling whenever she is pressured by heavy thoughts. While exploring the wonderful nature, she loves to be fascinated by the ways people find to survive.

But, she’s not one among the helpless ones compared to her cute appearance, she’s always equipped with a woodsman and cannon: her two trusted handguns and she isn’t afraid to kill or harm anyone who tries to get in her way.

Along with that, she’s also accompanied by her best friend and a loyal partner Hermes, a motorcycle who has helped Kino through all her sorrows during her journeys.

Together, they have toured the huge countryside and shared multiple goals of always moving forward with one rule – no staying in one country for over three days.

Ahead in the story, both Kino and Hermes run into many different personalities and study the rules of different cultures. They will eventually grow and find out about their values and virtues, all this while facing the natural hurdles in life.

The Life of Guskou Budori follows the story of a young boy called Guskou who lives in a town located in the countryside along with his parents and one little sister.

However, his happy life is disturbed when a string of natural disasters separates him from his family and he is forced to leave home and search for his future on his own.

He is determined to improve the quality of life for countrymen and so, he decides to join a group of scientists named Ihatov Volcano Department and thereon starts to take pride in scientific projects to fight against the natural disasters that separated him from his home.