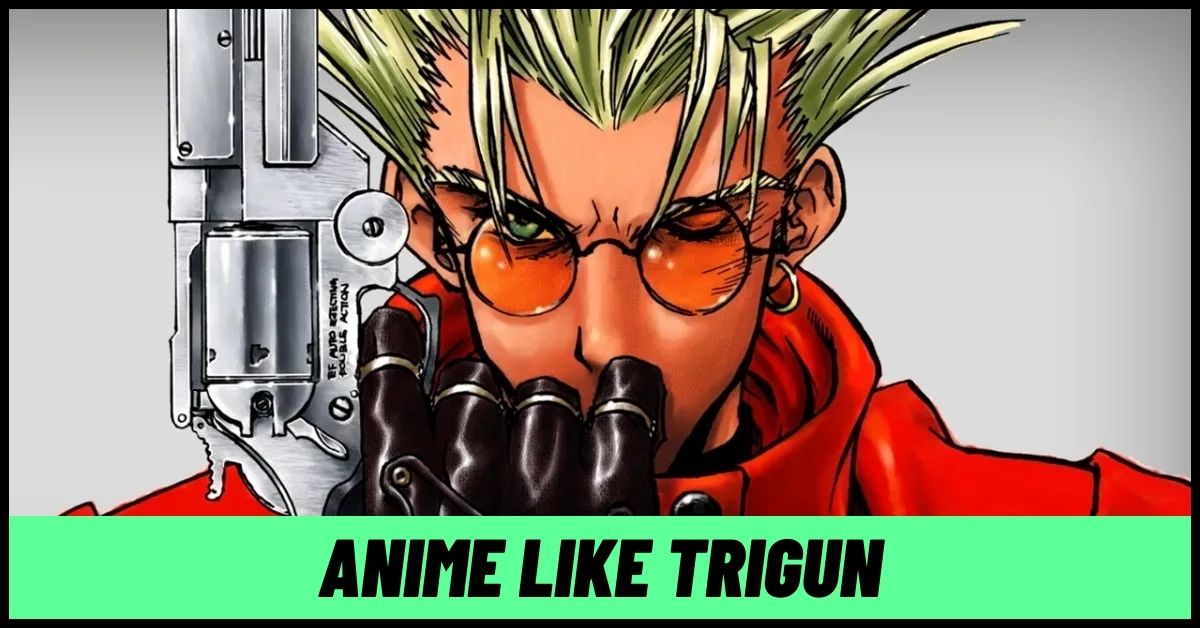 Trigun says that Vash the Stampede holds a bounty worth $60,000,000,000 on his head because he is a merciless villain who destroys entire cities for fun and loves to leave a trail of destruction and death wherever he goes.

But, in reality, Vash is a total softie who claims to have never done something wrong and avoids violence.

He’s crazy about doughnuts and holds a buffoonish mindset, currently traveling across the wasteland of Gunsmoke planet – while two agents from insurance companies named Meryl Stryfe and Milly Thompson are tailing him, an attempt to lessen his impact on people.

Soon, the trio will be involved in a life-or-death situation, surrounded by legendary assassins and Vash’s dark past will be disclosed. Trigun surely holds the title for adventure. It has some amazing action scenes and is a must-watch if you love adventure.

But, if you have already watched it and want to know more shows like Trigun, then you are sure to love the list of the 7 best anime like Trigun mentioned in the article below!

Hunter x Hunter talks about how hunters devote themselves to completing hazardous jobs including navigating across hideous corners and territories to locate rare monsters and objects.

Before becoming a hunter, one is supposed to pass the hunter examination, which is a high-risk selection process and the applicant can end up handicapped or can even die.

All the ambitious participants are brave challengers who pass the notorious examination for personal reasons. The same goes for a 12-year-old boy named Gon Freecss, who is striving to become a hunter to find his father who is a hunter himself.

The boy believes that he will meet his father after becoming a hunter and so he moves forward to take the first step in the process.

Upon entering the hunter exam, he makes friends with a medical student named Leorio Paladiknight, along with a vindictive named Kurapika and an ex-assassin called Killua Zoldyck.

All the friends have different motives, but still come together in a band for one common goal.

Rainbow Begins with a News from Japan in 1955 saying that Mario Minakami has just entered the Shounan Special Reform Academy with his five teenage friends, who have been imprisoned on big criminal charges.

They are assigned to the same prison and meet their old inmate named Rokurouta Sakuragi – also an ex-boxer.

All these seven cellmates established a strong bond and under the ex-boxer’s guidance, they promised to meet outside the prison after serving their sentences – leading the delinquents to start viewing their baseless lives in a better light.

Rainbow: Nisha Rokubou no Shichinin shows the seven prisoners as they strive together to fight against the suffering and humiliation brought upon them by Ishihara – a sadistic guard who holds a grievance against Rokarouta, along with the doctor named Gisuke Sasaki – who finds it fun to violate the boys.

Space Dandy is about a groovy man with a pompadour outfit named Dandy, who navigates across space, exploring stars, seeking radius aliens for money, with a desire to visit his favorite place BooBies, serving the best and dinner.

Dandy travels across the different galaxies in his trustworthy ship named Aloha Oe and is accompanied by two equally unique friends – a vacuum cleaner robot named QT along with a cat-like alien known as Meow.

Dandy’s job may look exciting and thrilling but is not simple and each day comes with different adventures. The anime shows how Dandy, along with his two crewmembers is dragged along the journeys and scenarios, all while fighting against the cruel scientist named Dr. Gel from the Gogol Empire after certain intervals.

Outlaw Star stars Gene Starwind, a man who has always dreamed about owning a ship in the lost city of stars. But, since not all dreams are meant to come true, he spends his life working various odd jobs along with his partner James Hawking.

However, their lives take a sudden twist when they take on a gig from Rachel Sweet, treasure hunting outlaw. They are given the task to protect a mysterious girl called Melfina, and the job soon changes their lives as they are to protect the girl aboard a highly advanced ship called Outlaw Star.

Seihou Bukyou Outlaw Star further has Gene along with his crew as they handle the ship bravely on the final frontier while navigating those stars, seeking answers to the mysterious surroundings of Melfina.

Along the way, they are to fight against dangerous bounty hunters, cat girls, space pirates and many more such people giving them an exhilarating adventure till the end.

Adventure of a crew traveling across the sea with a mysterious girl while fighting against several pirates and enemies – what else do you want to be convinced that Outlaw Star is one of the best anime like Trigun for Action and Adventure?

Michiko and Hatchin start when a criminal named Michiko Malandro breaks off from the high security of the prison for the fourth time, seeking a man from her past.

She soon finds a clue from Hana Morenos, a young girl stuck with her abusive foster family. She is powerless but dreams about the day when she will finally be taken by her charming Prince.

However, Hannah is clueless that her charming Prince is actually a husky criminal who is charging toward her on a stolen bike – introducing herself as her mother.

The awkward duo follows the path of their dreams under the unromantic heat of the South American sun, on the lands of Diamandra. They navigate through the cities of poverty and betrayal with child exploitation barely hiding.

Meanwhile, the word of Michiko’s manhunt reaches till the land of a criminal syndicate named Monstro Preto – and the gangs embark on a journey towards the two girls. The story further follows these two as they are being chased to be hunted down.

Desert Punk starts when Japan is left with nothing but sand and ruins in a desert everywhere after the post-apocalyptic destruction.

The country which was once crowded has the only survivors lying on the hospital beds. This is the condition of a normal person, but for those who have spent a long time under the Kanto sun, the desert offers a unique chance to make a name for them.

One among them is a handyman named Sunabouzu, or rather be called Desert Punk, who has gained a good reputation for always completing his jobs at any cost.

He is sharp and ruthless – uses his force to bring in destruction against his opponents. But, the Vixen of the Desert named Junko Asagiri soon discovers that he’s weak against large-breasted desert girls.

The Anime further follows these two in their chaotic adventures throughout the desert with more crew members entering the show, including more perversion and senseless brutal violence on lands already destroyed by their fathers.

Mobile Suit Gundam: Iron-Blooded Orphans mentions the calamity war. After the great war between outer space and earth colonies finally ended after 300 years, now the earth is controlled by 4 economic blocs along with a military organization named Gjallarhorn is held responsible for keeping the stability and peace.

The story talks about a young aristocrat named Kudelia Aina Berof stein from the Autonomous Region, who is horrified watching the appalling living situations of Mars people and ends up getting in the world in the Red Planet’s independence movement.

She decides to partake in a journey to earth to deal with Chiate – the economic conditions with the earthly colonies that control the Mars region.

For the same, she hires the protective services from a local company to escort her throughout the journey. The chosen ones in the job are child soldiers including Mikazuki Augus and Orga Itsuka.

Mobile Suit Gundam: Iron-Blooded Orphans follow a series of assassination scenes by the young revolutionary organization interested in Orga and his comrades, as they struggle to fight against the professional assassination and reach the end destination.