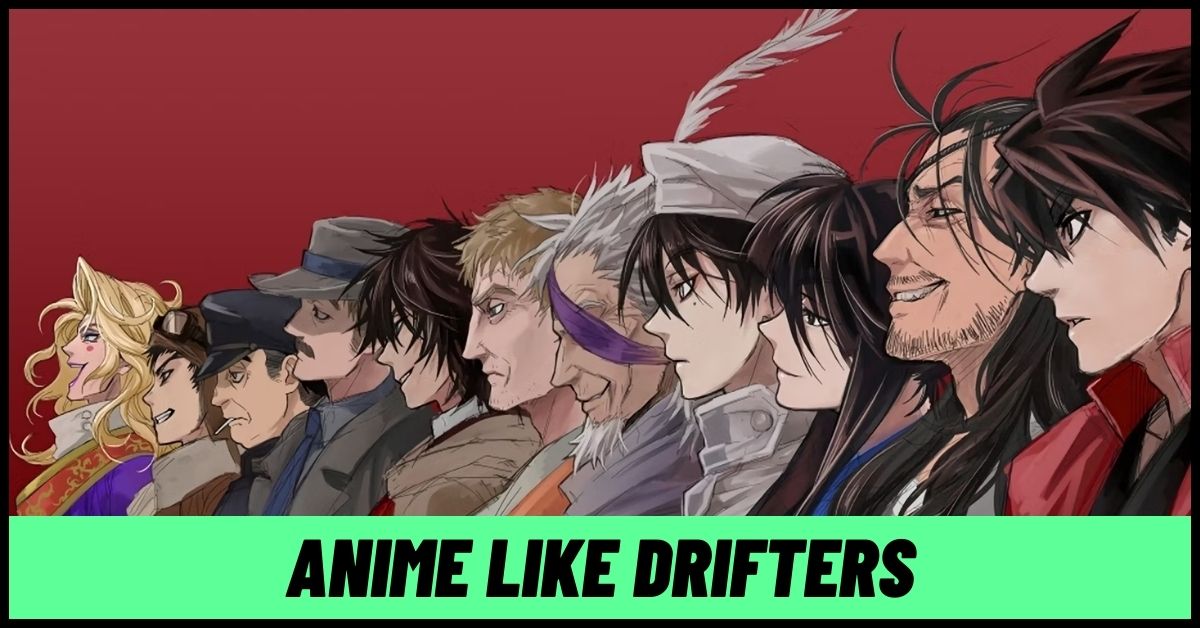 Anime like Drifters: Are you interested in watching some anime that contains not just the normal action between the villain and hero but some action that can destroy an entire city, village, or country?

Where the disaster is so big that citizens have to run for their lives. If you are interested in these kinds of stories then we are guessing you might have come across some anime similar to Drifters.

Drifters start with the Battle of Sekigahara in 1600 where Toyohisa Shimazu is a responsible rearguard for retreating his army while being critically injured.

Suddenly, he gets pulled into a modern and glowing white hall that has hundreds of doors on both of his sides where he face a stoic man named Murasaki before he is pulled into the nearest side door – leading to a world completely unknown to him.

The lands of the new world are filled with several fantastical creatures from different eras – even those who are supposed to be dead according to Toyohisa’s era.

To understand what is going on, he makes friends with a famous warlord and an ancient archer – and together they learn that they were summoned by the Lord of an Empire to fight from their side against other parties and win the battle for humanity.

Drifters is like an Isekai anime where people are transferred from one world to another with extreme levels of action between armies for victory and humanity.

Now talking about you, if you have taken an interest in the aforementioned themes and are searching for more shows like Drifters, then we are happy to inform you that the article mentioned below contains a whole list of the 7 best shows like Drifters you must watch!

Berserk shows the life of Guts, who is labeled for death with a destiny that he will be hunted by demons until he dies. To move on with reality, Guts is set on a journey to defend himself from such a cruel fate as tons of beasts relentlessly chase him wherever he goes.

To defy fate, he takes up the responsibility for a monstrous blade called Dragonslayer, only to receive the exact vengeance from that one responsible person for all this chaos – the man who he considers closest and his best friend.

Along the way, he meets different people, now his allies, such as the small elf called Puck and a young thief searching for a man to learn sportsmanship from Isidro.

Together, these men go on the journey to solve several quests and reach a different level of danger, something riskier than they have ever experienced in their entire life.

Hellsing narrates about a certain organization named Hellsing that is an expert in taking care of supernatural threats. The organization is currently called to eradicate a vampire that is going around the village of Cheddar and turning the villagers into ghouls.

To stop the ruthless empire, the head of the organization named Sir Integra Fairbrook Wingates Hellsing sends off her most dangerous player – a vampire himself called Alucard.

Alucard is armed with only one handgun and with the help of that, he seems to be wreaking all the monsters infecting the village. But, in this chaos, a young police officer named Seras Victoria gets caught and is now mortally wounded.

Alucard doesn’t like her dying when she was actually doing a good job, and thus offers her two choices: she can either die as a human or live as a vampire, solely determined to work under the Hellsing organization.

The girl, wanting to live, immediately agrees to become a vampire. But, since turning into a vampire is not children’s play, she faces several consequences and problems accepting her new body.

The rest of the series shows how she is trying to accept herself while battling on the front lines in the wars between humans and superhumans.

Castlevania is inspired by an infamous video game series with the concept of dark medieval fantasy. It follows the life of the last surviving member of the disgraced Belmont clan named Trevor Belmont, who is trying to save Eastern Europe from near extinction at the hands of Vlad Dracula Tepes.

Dracula, along with his species of vampires is preparing to end the world of humanity but since Belmont is not alone anymore, he and his misfit soldiers set on a mission to find a way to fight against the evil Dracula and save mankind.

Indeed, Castlevania is one of the interesting anime like Drifters because while the plot has many similarities, the anime is also about an old era when mankind nearly went extinct.

Zankyou no Terror, also called Terror in Resonance, begins when a terrorist attack takes place in Japan with the words VON written in red, the only thing visible after everything is destroyed.

The government and politicians are all devastated because of their inability to act while the police are seeking ways to search for criminals.

The public is left clueless until six months after the incident when a weird video appears on the internet which has two teenage boys who introduce themselves as Sphinx, directly challenging the government and police of Japan – also threatening to spread more destruction across Tokyo.

After the video goes viral, the city, as expected, is in panic with different rumors spreading across the city while the police are desperately searching for leads in their investigation against the two terrorists. Meanwhile, Detective Kenjirou Shibazaki is caught in all this mess – all at once.

Gungrave includes two best friends – nearly called brothers named Brandon Heat and Harry McDowell. One day, they receive a violent reminder that the world can be as merciless as it can get.

Their life used to consist of simple things like local conflicts and committing small robberies to pass time and earn a living. But, while doing all this they didn’t realize that the happiness is fleeting that can change.

Millennion – the biggest and most popular mafia syndicate in the area accepts Brandon and Harry into the lowest ranks in that hierarchy. Harry has goals to climb the ladder of ranks and replace the leader of the mafia one day.

As for Brandon, he has only one wish, to help his friend and fight against big daddy who has somewhat kidnapped the woman Brandon loves.

Gungrave is included in this list of best anime like Drifters because although it doesn’t properly have any supernatural concept, the action included can be similar to something you witnessed in Drifters and the plot is interesting too.

Ninja Scroll has Jubei Kibagami wandering across the streets of feudal Japan as a traveling swordsman available for hire. The recent betrayal has left him masterless and he no longer possesses the patience to deal with political sections and schemes.

But, much to his dismay, both the past and political scenes collide when he encounters and saves a female ninja named Kagero, from a man who could turn his body as hard as a stone.

Afterward, he comes to know that Kagero is the only ninja alive from her clan, continuing her last mission which includes the investigation of a mysterious epidemic that infected the entire village.

Jubei has no business with what she said but the last man he just defeated has an army chasing after the woman, which eventually involves Jubei in the mess.

Further in the story, to worsen the situation, a government spy appears and poisons Jubei while the journey further leads Jubei and Kagero to shadow leaders.

Goblin Slayer, as the name suggests, shows that goblins are well known for cunning and quick reproduction but since their reputation is counted as the lowest of the monsters, their threat is also neglected.

These goblins are further seen intruding into villages to kidnap females of different species for breeding and then continue to destroy families.

However, their rule is about to come to an end because of a commemorative porcelain-ranked adventurer, a 15-year-old priestess who has now joined a band of young and active threshers to investigate a certain tribe of goblins.

These goblins are responsible for the disappearance of various village women. The story further shows the mesmerizing entry of the Goblin Slayer as he saves the priestess in an accident and assists the group of Silver Rank in all the adventures to kill goblins.

Goblin Slayer is one of the best anime like Drifters because it has enough scenes of supernatural powers in people with a dark fantasy concept in the story.