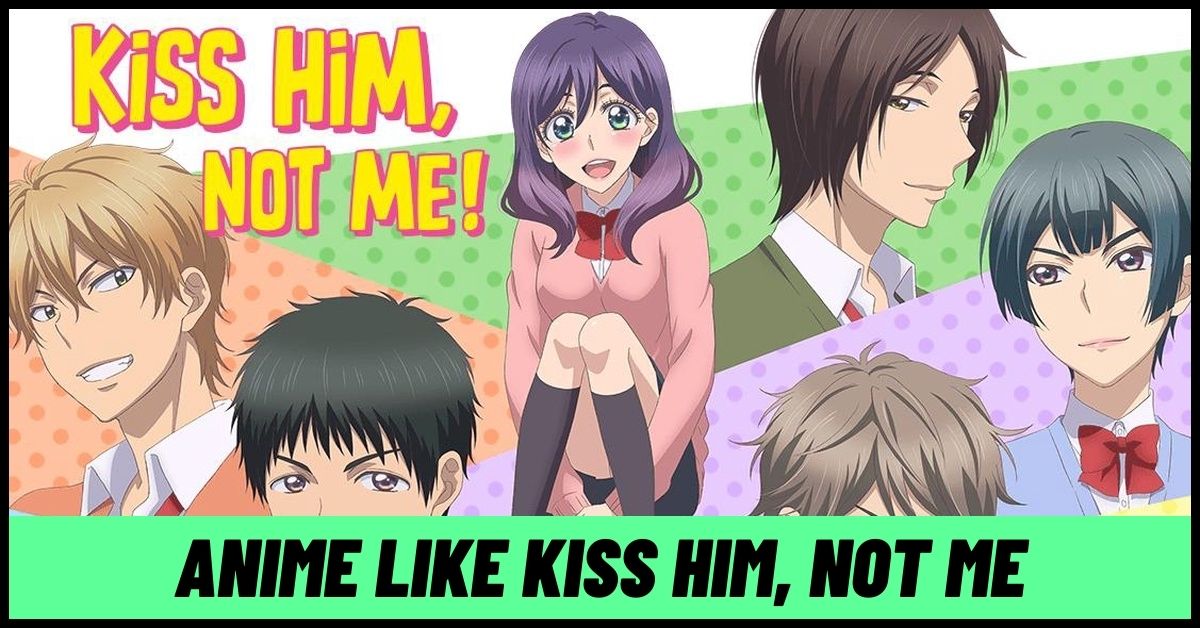 Anime with immense action, emotional love stories, and beautiful adventures sound really good, but, you must give some decent and good anime like Kiss Him, Not Me a try once in a while – which contains enough pieces of romance, action, fantasy, or comedy to keep you entertained till the end.

About Kiss, Him Not Me

Kiss Him, Not Me is about Kae Serinuma, a good high school student, but who’s obsessed with BL. She enjoys imagining her male classmates falling for each other.

Also, let’s not forget that she’s noticeably overweight. One night while watching her favorite show, her favorite character dies, leaving her traumatized. This led her to not leave her room and eat nothing for a week.

After a week, she is ready to go to school but she notices that she’s not overweight anymore and is noticeably beautiful. Now, she has everyone’s eyes on her and is the center of attraction for four boys.

All 4 boys would love to spend some time with her, but all Serinuma wants is for them to complete her BL desires.

Kiss Him, Not Me narrates a simple and funny story and it is the best when you don’t want to experience any gore, dying of characters, and such traumas.

But, if you have already watched it, then you must have a look at our list of best shows like Kiss Him, Not Me mentioned in the article below – giving you all types of fun and beautiful stories!

Ouran High School Host Club includes Haruhi Fujioko, who recently got transferred to a new high school – a prestigious Academy where you can only find Rich students.

Once, while searching for a quiet place to study, she comes across a seemingly empty music room. However, as soon as she entered the room, she was welcomed by the legendary Host Club led by Tamaki Suou.

They take her as the new member of the club, and due to her personality giving the boys vibes, she’s mistaken for a boy. Even before she could deny it, the president of the group startles her and by mistake, she ends up breaking an expensive vase.

Now, paying for the vase will cost her a fortune, so the best way to pay for the vase is still work for the host club.

From that moment on words, she welcomes a new journey with the other members of the club including Takashi Morinozuka, Mitsukuni Haninozuka, Hikaru, and Kaoru Hitachiin.

Yona of the Dawn

Yona of the Dawn has Yona – a beautiful princess of the Kouka Kingdom. She has her royal palace and is protected from danger.

But, all her good days come to an end when the enemy threatens to destroy all she holds dear, including her right as the princess.

To move to a safer side, she along with her loyal bodyguard and childhood best friend Son Hak, had to flee from the mansion.

But, her difficulties don’t end there, and she realizes that the kingdom where she felt safe is no more.

Watch Yona of the Dawn

But, when she confesses her love to Nozaki, he hands her an unfamiliar autograph, and later she discovers that her crush is a respected shoujo mangaka – publishing his work under the pen name Sakiko Yumeno.

Through a series of events, Chiyo is now Nozaki’s assistant. Further in the story, she bumps into many odd schoolmates including a shameless assistant Mikoto Mikoshiba and Yuu Kashima, also known as the prince of the school.

Monthly Girls’ Nozaki-kun follows Chiyo as she struggles to help Nozaki with his manga career, in hopes that he will gradually notice her feelings for him.

The Wallflower talks about Sunako Nakahara, who has been rejected by her crush and insulted for her appearance – which led her to become a shut-in with immense hatred for beauty.

For the same reason, she is said to live with her aunt but unfortunately, she’d have to share the house with four extremely handsome boys of her age. In reality, her aunt has made a deal with the four boys in exchange for living rent-free, that they have to take responsibility and turn her into a proper lady.

The Wallflower is one the must-watch anime like Kiss Him, Not Me, since it contains a mixture of comedy, romance, and a good set of horror scenes to throw your off-guard at times.

WataMote: No Matter How I Look At It, It’s You Guys’ Fault I’m Not Popular! says that after living 50 virtual high school lies and dating more than 100 virtual boys, Tomoko Kuroki thinks that she is all good to go for her first year of high school.

However, in reality, she is an introverted and uneasy girl, but she doesn’t realize it. Yet, with the support of her best friend Yuu Naruse and brother Tomoki, Tomoko attempts to be a brave girl and start the new world of high school.

WataMote: No Matter How I Look At It, It’s You Guys’ Fault I’m Not Popular! Narrates the story of a socially awkward girl and a friendless high school Otaku, as she goes on a journey to overcome her personal insecurity barriers to live a fulfilling life like any other ordinary highschooler.

Actually, I am… starts with an ordinary high schooler named Asahi Kurumine finding out the truth that his crush, Youko Shiragami is a vampire. Now that her identity is found out, Yoko has to quit school to keep our family safe.

But, Asahi does not agree with the decision and he promises to keep the truth a secret. But, Asahi is a type of man who can hardly keep secrets to himself. This leads to the beginning of his problems, while more supernatural beings enter his life and he’s to protect all their identities.

Actually, I am… is one of the best anime like Kiss Him, Not Me because it contains a good combination of romance and comedy.

Watch Actually, I am…

Brothers Conflict stars Ema Hinata, a sweet girl with only a father as a family. One day, she discovers that her father is going to remarry Miwa Asahina – a rich fashion designer.

Ema is happy to get a new place as a home, but the family is much greater than she imagined – she now has 13 step-brothers, all handsome and charming.

She decides to give her father some privacy and so, moves in with her new brothers. Soon after that, she realizes that the brothers are not going to give her the family she had expected, because all the brothers developed feelings for her – what you call love.

Brothers Conflict is seemingly one of the good animes like Kiss Him, Not Me, especially if you are into some incest, and also because it has funny and romantic scenes – something similar in Kiss Him, Not Me.

Outburst Dreamer Boys has Mizuki Hijiri, who has recently transferred schools and wants a normal school life. But, her only wish is crumpled when she comes across the famous Hero Club.

All of the members of the club are boys and suffering from various chuunibyou like – Yamato Noda is a hero and performs good deeds to protect others, Kazuhiro Nakamura says he was Touga Ryushouin in his last life, Tomoki Takashima has a crush on 2D anime girl Sora and Rei Tsukum is the schemer of the group.

Mizuki ends up becoming the new member of the club. But, despite the oddballs, their friendship is real and a good ton of exciting events now await Hijri.

Dance with Devils begins when Ritsuka Tachibana, an obedient student, is called by the student council because of breaking school rules. The student council is led by Rem Kaginuki and includes Urie Sogami, Shiki Natsumezaka, and Mage Nanashiro.

All the members try to question her but it is clear that they have some sinister motives behind this. But, that is not even half worse because soon after that incident, Ritsuka’s mother gets kidnapped and she is somehow pulled into a war for power between vampires and devils.

Both the species are seeking Grimoire – an ancient forbidden item that will give them the power to rule over the world and coincidentally, Ritsuka is connected to the artifact.

She feels a bit relieved when her protective brother arrives from overseas, but, to her dismay – he has his dark secrets to save.