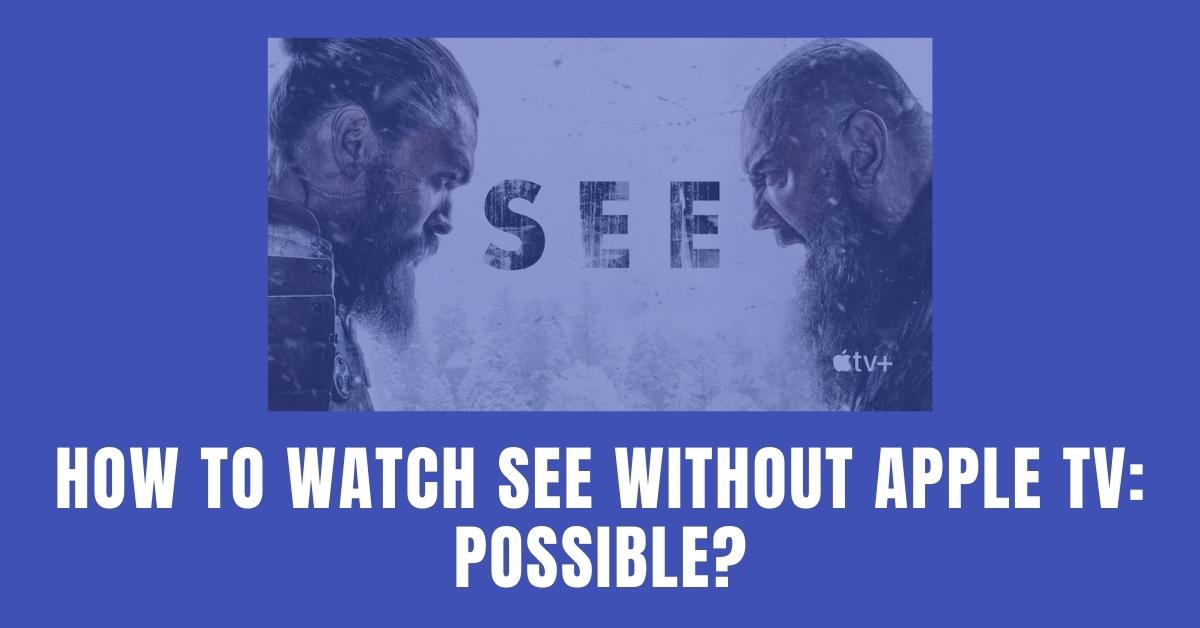 Can you download Apple TV on any smart TV? Many people are wondering how to watch See without Apple TV, it is because ‘See’ got released on Apple TV+.

This article will give you a simple and easy guide to watch ‘See’ without “Apple TV”. So, without Apple TV you can watch see but without Apple TV+ you cannot currently watch the ‘See’ show legally because it is an original show exclusive to the Apple TV+ subscription.

See is an American sci-fi drama streaming TV series which was produced for Apple TV+ starring Alfre Woodard and Jason Momoa in the leading roles. In this, a virus eradicates all human beings except two million, those who survived lost the sense of sight.

It was initially premiered in Nov 2019 and its second season was supposed to release in 2020, but due to pandemic, its filming was temporarily delayed.

How to watch See Without Apple TV?

Many don’t actually know that Apple TV and Apple TV+ are not the same things. Apple TV is a device that is like a Roku device and you don’t require an Apple TV to watch the show ‘See’ or any other Apple TV+ movies or series.

Nevertheless, you do require a subscription for Apple TV+ that you can watch on many other devices.

You don’t actually need an Apple TV to watch the show “See.” Below is an easy and simple guide on how to watch See without Apple TV.

Use the Apple TV+ on the Apple TV app, that will be already available on Apple TV, iPad, and Mac, or simply watch on your smart TV, gaming console, or streaming devices.

Every new user has the ability to sign up for a 7-day free trial of Apple TV+, which is pretty long enough to decide whether it is worth it or not.

Not only a 7-day free trial, you can also get a one-year free subscription of Apple TV+ by buying a new Apple device such as a tablet, phone, or laptop. Read on further to know more about Apple TV’s plans & pricing.

Conclusion: Basically, Apple TV is a small box which you can plug your TV that has access to the internet.

So, you don’t really require an Apple TV to watch movies or shows that are available in the Apple TV+ subscription.

Can I watch see without Apple TV?

Yes. Without Apple TV you can watch see but without Apple TV+ you cannot currently watch the ‘See’ show legally because it is original show exclusive to the Apple TV+ subscription.

Can you watch Apple TV on browser?

Yes. Apple gives you a web access to Apple TV+ content for subscribers at tv.apple.com. You can watch Apple TV+ using the Apple TV app on your iOS devices.

Do I need an Apple TV device to watch Apple TV?

Apple’s streaming service is only accessible via the TV app but you don’t actually require an Apple device to enjoy it. TV app will allow you to stream and download the content from Apple TV channels.

You can watch Apple TV+ through the Apple TV application, this means you can watch it on Apple devices and also on other compatible Streaming and TV devices.

Why can’t I watch Apple TV on my TV?

Update to the newest version of the Apple TV. If you’re using a compatible streaming device or smart TV which has an internet connection so that the Apple TV app update automatically.