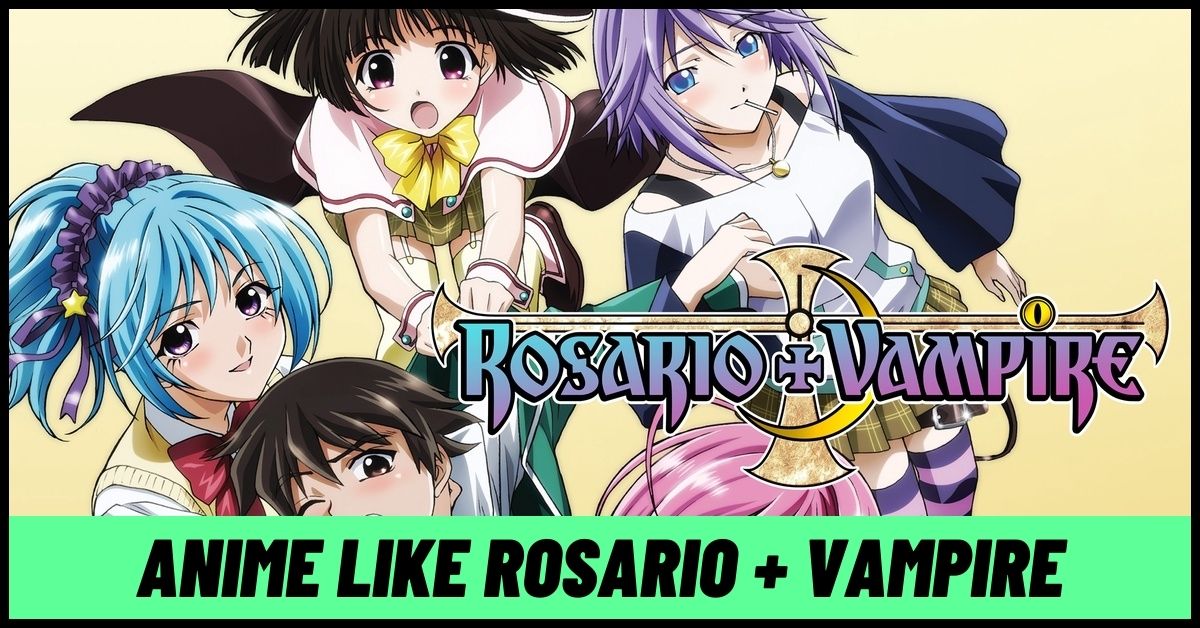 Anime like Rosario Vampire: If you are interested in the female lead being a superhuman or the male protagonist possessing some supernatural powers – the animal industry has plenty of such anime to fulfill your needs.

Apart from that, even if you’re looking for some decent anime with less gore and action, but where the main protagonist is surrounded by females – we have got you covered with some interesting anime like Rosario + Vampire.

Rosario + Vampire talks about a normal Youkai Academy, or so it looks like to others when in reality, its students are all monsters learning and training to live with humans.

All the students attend the Academy in human form and learn normal academic subjects like foreign languages, math, literature, etc.

But, all this happens with one strict rule – any human scene on the academy grounds has to be executed. Now enters Tsukune Aono, whose parents have enrolled him in this Academy just because of his bad grades, he wasn’t able to get into any other institute.

Right after entering the campus, he bumps into Moka Akashiya, a gorgeous girl. At that moment he swears that he will not leave the campus and grow his relationship with Moka – all while not knowing that she’s actually a vampire.

Indeed, Rosario + Vampire has both the genres you were looking for, it has the male lead surrounded by girls with supernatural and fantasy topics mixed.

However, if you have already watched it and want to know if there are more shows like Rosario Vampire, then we are glad to inform you that the article mentioned below contains a list of 11 best animes like Rosario + Vampire you can binge on right now!

Spice and Wolf talk about Holo, a powerful god who is to visit the small towns of Pasloe to spread his blessings for the annual harvest each year. However, as the years go by, the villagers seem to become more self-sufficient and the belief in the wolf deity has been reduced to just a folktale.

But, when Kraft Lawrence, a traveling merchant, stops at the settlement, the wolf deity offers him to become a business partner if he takes her to his home in the Yoitsu.

The trader is at first hesitant, but he soon realizes Holo’s unusual power which can evaluate a person’s character, and so, he accepts her proposition.

Now that Lawrence has gotten a powerful business partner by his side, with the help of his sharp bargaining skills and as great a negotiator as he is, he’s only a few steps away from reaching his goal of opening a shop. But, as he travels across the countryside with the god, he realizes that his aspirations are turning into something else.

The Pet Girl of Sakurasou

The Pet Girl of Sakurasou talks about Suimei High, the Sakura-sou dormitory famous for sheltering schools’ most notorious delinquents. That is why when Sorata Kanda enters the dorm, escaping is his top-most goal.

However, he’s trapped in the insane asylum for the time being. In the dorm, he bumps into his fellow residents including – a charming playboy writer named Jin Mitaka, an unsociable Ryuunosuke Akasaka along with the cheerful animator called Misaki Kamiigusa.

According to Sorata, the only normal friend he has is the aspiring voice actress named Nanami Aoyama. But, when Mashiro Shiina, a foreign exchange student  is transferred to the same dorm, Sorata is instantly attacked by her beauty. Mashiro is actually a world-renowned artist but she’s unable to complete a single daily task.

For the same reason, Sorata is handed over the responsibility to guide and help her. While doing so, both become close friends, while Sorata has completely forgotten about his top-most goal.

Watch The Pet Girl of Sakurasou

The World God Only Knows

The World God Only Knows stars Keima Katsuragi, the “God of Conquest”. After freeing the myriad of women from spirits, he’s now given the task to find Jupiter Sisters, the same goddesses who sealed Old Hell years back.

Diana, the one living in her best friend’s body, informed that they have taken shelter in the hearts of girls Keima has helped before. She also informs that if Diana and her sisters are reunited, their power is capable of sealing the runaway spirits – something which will ease Keima of his duties.

Keima is hesitant and even before he can agree to the deal, he finds out that the sisters are targeted by a dangerous organization, and that is how he gets included in yet another mess.

The World God Only Knows is included in this list of best anime like Rosario + Vampire because it contains fantasy where the main protagonist is given the role of exorcizing spirits, along with a couple more scenes similar to Rosario + Vampire.

Watch The World God Only Knows

Is This a Zombie?

Is This a Zombie? is about Ayumu Aikawa, a 16-year-old high school student, who is murdered while analyzing a suspicious property. But, he soon wakes up next to an odd armored girl named Eucliwood Hellscythe.

The girl reveals herself as a necromancer and has revived Ayumu as a zombie. Now that Ayumu is immortal, he has set a goal to kill his murderer. One day while searching for the killer, he sees an odd girl in the cemetery in a magical girl’s costume.

In reality, she’s been fighting with a monstrous bear who has entered the human realm. Now that he has seen her, she’s supposed to erase his memories but instead gets her powers drawn out and into Ayumu.

Now that she doesn’t have any powers, she orders Ayumu to take her role and fight all the monsters he comes across.

Watch Is This a Zombie?

Oreshura shows Eita Kidou’s life and how he indulged his whole high school life in studies, in hopes to become a doctor after his parents parted. That is when the popular Masuzu Natsukawa lay eyes on him.

She wants to get away from people’s unwanted attention and love, and that is why she asks Eita to become her boyfriend. But, the lad refuses to which Masuzu threatens him to post the content from his journal online if he doesn’t agree.

That is how Eita is involved in a fake romantic relationship with the most popular girl in school. Eita’s life is twisted by the amount of attention he’s getting while being envied by some and receiving confessions from others. He has to endure everything because of his newfound relationship.

Outbreak Company stars Shinichi Kanou – an otaku with a wide range of knowledge regarding manga, video games, and anime. One day, he applies for a job to escape his shut-in lifestyle but is kidnapped and transported to a fantasy world filled with dragons, dwarves, and elves.

Shinichi is trapped in the strange world, but what’s more interesting is that – he is given a task by the Japanese government to spread the Otaku culture throughout the world by becoming an ‘Otaku Missionary’.

To complete this mission, he gets full support from the government along with the half-elf maid Myucel and the princes of the Eldant Empire named Petralka. Together with him, he is required to fight against all the obstacles of social classes, ethnic discrimination, and politics while promoting Otaku culture.

Demon King Daimao starts with Akuto Sai transferring to Constant Magic Academy with a dream to change the world for good. On the way, he befriends a ninja clan member named Junko Hattori.

But, the situation suddenly takes a turn when right after his arrival, he is announced as the next demon king. The word spreads across the school at speed and students begin to fear him. Likewise, Junko’s trust in him fades too. But, Akuto is set on the goal – to not let fate control his future.

On top of that, he is surrounded by beautiful girls, who each have their reasons to get closer to him, and are simply showing him affection.

To LOVE Ru starts with Rito Yuuki wanting to confess his love to Haruna, a classmate. But, his life takes a sudden turn when one night, a mysterious girl lands right on top of him while he’s bathing – that too without any clothes on.

Further, he learns that the girl is Lala Satalin Deviluke – a princess of an alien kingdom who has run away from her home. Although she’s a princess and holds a high position in the empire, she is more than ready to marry Eito to avoid unwanted political marriage.

To LOVE Ru follows Rito as he is struggling to manage the chaos brought in by Lala. Along with her, Rito further encounters many more girls who, unknowingly ruin all his attempts to confess his love to Haruna.

Daimidaler: Prince vs. Penguin Empire has battles going on between Penguin Empire, a unique species that arrived on earth out of blue, and the Beauty Salon Prince, a confidential anti-penguin organization.

To defeat the penguins, the anti-penguin organization has established a new weapon, a huge robot called Daimidaler, and now they are searching for a pilot.

Out of all the people, they choose Koichi Madanbashi, a hot-tempered high schooler who is crazy about big breasts because he is made of ‘Hi-ERo particles’ – an unknown source of energy.

Nisekoi: False Love talks about Raku Ichijou, the only heir to a dangerous yakuza family. 10 years back, he made a promise to his childhood friend, and now, all he needs is to find a girl and take the key from her to unlock the pendant he holds.

Years after that, the boy only wants to live a normal teenage life alongside his crush, but, the entry of the American Bee Hive Gang raids his idyllic romantic dreams, and he is sent on a mission to pretend that he’s fallen for Bee Hive Gang’s chief’s daughter.

However, instead of falling in love, they hate each other at first sight. The story further follows the daily antics of this unique couple, who are forced to get along for the sake of their gang’s peace.

The Qwaser of Stigmata

The Qwaser of Stigmata started with Tomo Yamanobe’s father, also the ex-headmaster of the Saint Mikhailov Academy disappearing. Before leaving, he left an art piece called ‘icon’. Right after he disappeared, a rumor of a serial killer striking female students of the same academy began to spread.

One night while coming back home with her sister Mafuyu Oribe, Tomo stumbled upon an injured silver-haired boy who disappeared the next moment. Still, Mafuyu goes looking for him only to find out that the church that has the icon is on fire.

While trying to save the painting, the rumored serial killer attacks her with an ability to control magnesium but right then, the silver-haired boy comes out of nowhere and rescues her. Mafuyu further finds out that the boy is Alexander Nikolaevich, a qwaser with the ability to control an element through his power of soma.

Mafuyu shrugs off the confusing ordeal but her life only gets messier when Sasha transfers to her class the very next day. The rest of the story includes Tomo and Mafuyu fighting with all the qwasers wandering around them while fighting with other monsters.

Watch The Qwaser of Stigmata

Contents hide
1 Spice and Wolf
2 The Pet Girl of Sakurasou
3 The World God Only Knows
4 Is This a Zombie?
5 Oreshura
6 Outbreak Company
7 Demon King Daimao
8 To LOVE Ru
9 Daimidaler: Prince vs. Penguin Empire
10 Nisekoi
11 The Qwaser of Stigmata
11.1 Share this:

Contents hide
1 Spice and Wolf
2 The Pet Girl of Sakurasou
3 The World God Only Knows
4 Is This a Zombie?
5 Oreshura
6 Outbreak Company
7 Demon King Daimao
8 To LOVE Ru
9 Daimidaler: Prince vs. Penguin Empire
10 Nisekoi
11 The Qwaser of Stigmata
11.1 Share this: