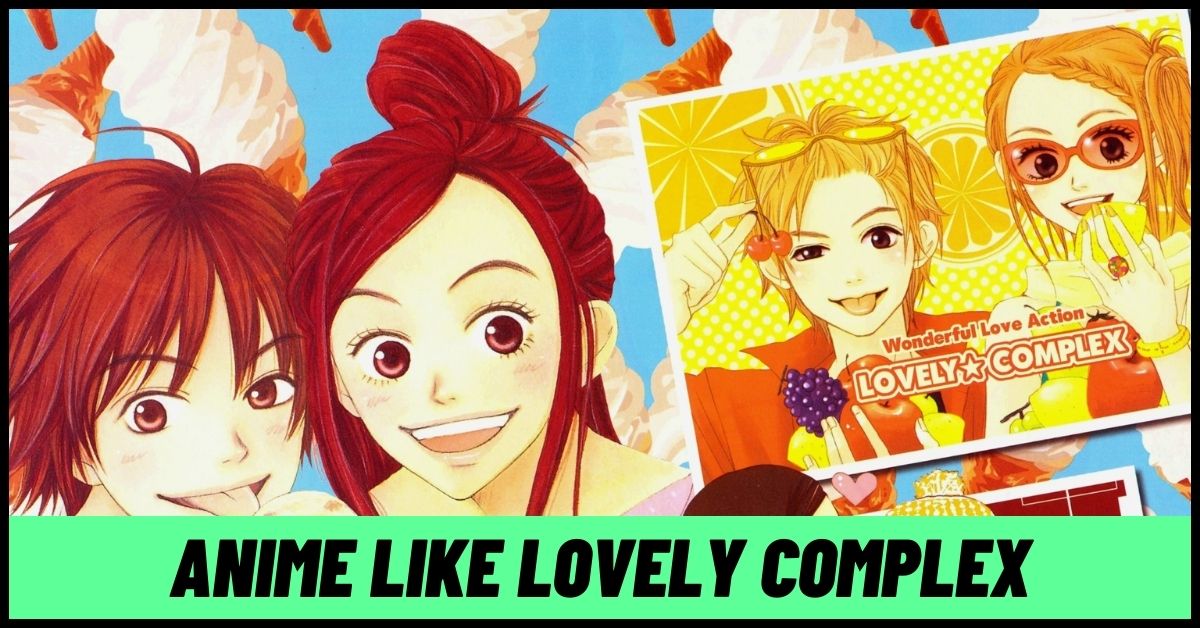 Anime like Lovely Complex: Romance with a bit of comedy – or rather a handful of comedy looks like a good combination to us. Why?

Simply because when you are on the edge feeling the romantic vibes like the main protagonists, comedy is the only genre to keep you relaxed and entertained without drama until the end.

And, when we talk about such shows, we are indeed specifically talking about some really good anime like Lovely Complex.

Lovely Complex speaks about Risa Koizumi and Atsushi Ootani, two high school students who are striving to find themselves a lover. But, since Koizumi is 172 cm tall, he seems to be much taller than a normal girl and Ootani is 156 cm, much shorter than the average boy.

On top of that, their crushes fall for each other leaving the two heartbroken. And to make everything even worse, their homeroom teacher gives them a label of a comedy duo due to the difference between their bodies.

Lovely Complex further follows the two protagonists as they motivate one another to find the love of their life and eventually become close friends.

Soon they find a similarity between their liking and feel some kind of chemistry in their bond. But, the question is – will their differences in personalities allow them to grow closer?

Lovely complex has the perfect combination of romantic comedy. Now, coming to the main point – if you are searching for more anime similar to Lovely Complex then you are sure to get hooked on the article mentioned below, which contains a list of the 7 best anime like Lovely Complex you can binge on tonight.

On one regular day, she was looking for a peaceful place to study when she came across a seemingly vacant music room. Upon entering, she is met with the members of a popular host club – a club that is filled with attractive boys who entertain girls from across the entire school.

But, when the founder and the president of the club called Tamaki Suou startle her suddenly, she bumps into a table and accidentally breaks a very expensive vase.

Since it is expensive, the repayment of the entire amount looks kind of difficult and so, the host club comes up with a solution that Haruhi should work for the host club as a host and entertain students until she repays the amount entirely.

Maid Sama! Tells the story of Misaki Ayuzawa, a strict sensation in Seika High School. She studies in an institution where you can usually find males dominating over girls.

However, after working hard enough in studying, she became the first-ever female student council president. From there on, she is especially strict with boys misbehaving in any corner of the school.

One day, Misaki hears a girl crying in the hallway and sees her with Takumi Usui, probably the most popular boy in the institution. He seems to be rejecting the love confession from the girl and seeing the situation, Misaki is enraged.

She blames Usui for making the girl cry but Usui is indifferent and walks past her as nothing happened. But, things take a drastic change when she runs into him again, while she’s working on her part-time job as a maid in a maid café.

She is entirely embarrassed but is determined to fight against anyone who will try to ruin her reputation in the school. But, Usui has no such plans, and instead, he decides to tease the girl and continues to visit the cafe almost regularly to observe as well as mock the girl at every chance he gets.

Tsuki ga Kirei starts as a new student entering the school and in the final year of junior high, the aspiring writer named Kotarou Azumi and a track team member called Akane Mizuno are together in one class.

These two are total strangers but a few encounters here and there provokes a kind of emotion between the two. Fluttering heart and a desperate yet shy gaze – these are the hints of young love as the faith brings the two to one path.

But, since love can be slow and complicated, Kotarou and Akane learn that love is not precise. Both agree that they find ease in each other’s presence along with tension and heartache, but since they’re not sure what the other one feels, they decide to take it slowly while hiding their true feelings.

But, the day finally comes when – under the shining light of a beautiful full moon, Kotarou is determined to ask Akane that one question that might change their relationship forever.

If you are interested in purely innocent romance along with a good amount of comedy by other supporting characters, then Tsuki ga Kirei is one of the must-watch anime like Lovely Complex to try out.

My Little Monster is about Shizuku Mizutani, a girl who is not least bit interested in her classmates and only cares about her grades. But, her unusual view of life starts to change when she bumps into a violent troublemaker Haru Yoshida, who has now stopped attending classes after getting into a dispute at the start of the school year.

Haru is not much different from Shizuku but he understands a bit of human nature and that is why he doesn’t have any friends. But, to Shizuku’s surprise, he announces himself as her friend and immediately confesses his love for her after meeting.

But, since Shizuku lacks social relations, she has a hard time understanding her relationship with Haru.

As days go by, their relationship starts to progress and she slowly discovers that Haru is not only about violence. She unconsciously starts to develop feelings for him but is entirely unsure what kind of feelings she is experiencing for the other except friendship.

Further in the story, Shizuku and Haru will together explore the true nature of their feelings and relationship.

Special A includes Hikari Hanazono, a girl who could do anything normal people can’t. When she was a child, she thought no one could beat her, until the arrival of Kei Takishima.

Expecting herself to win again, Hikari challenges him to a match but things don’t go as planned. She loses not once but every time she challenges him. From that moment on words, she is determined to beat Kei at everything, whether it is academics or athletics.

To achieve the same goal, she enters the same school as Kei, an institute for wealthy people named Hakusenkan. Since both are intelligent, they hold the top rankings in the institute and are known to be among the top seven of the best students enrolled in the special class called Special A.

While Hikari is on a run to beat Kei, she’s also aware that Kei has hidden feelings for her. The story further follows the students of Special A as they deal with multiple competitions, friendship bonds, and a few love situations.

Boarding School Juliet narrates a tale of Dahlia Academy, which includes two countries with similar pride where the black doggies come from the Eastern Nation of Touwa and the white cats of the Principality of the West have a prolonged quarrel to solve.

Likewise, Romeo Inuzuka and Juliet Persia, the heads of the respective dorms, are better enemies. In secret, both Romeo and Juliet are madly in love with each other but revealing their relationship would be like betraying their comrades.

Thus, they decide to hide their love to maintain the peace which prevails, but there is one main disadvantage – they are not getting a single chance to do all the couple activities they want.

Boarding School Juliet is one of the best anime like Lovely Complex since it had secret relationships involved which automatically gives rise to romance and Comedy.

Peach Girl has Momo Adachi, the female protagonist who has a gorgeous body, tan skin, long and dyed hair, and is a former high school swim team member – she has everything she needs to get any guy she wants.

But, she already has a crush on someone named Kazuya “Toji” Toujigamori, the basketball player who, sadly, only wants to like pale-skinned girls.

While she is trying to change her appearance according to her crush’s preferences, her envious classmates have been circulating false rumors that she is easy to get along with.

Momo has one friend named Sae Kashiwagi who seems to be always there to help comfort her and overcome such rumors but in reality, Momo isn’t aware that Sae is the one who schemed all the rumors to steal Toji.

The story is further complicated when a popular male student at high school, Kairi Okayasu, proposes to Momo publicly and is determined to date her.

The story revolves around this love triangle as things get messy as time goes by and Momo has to deal with a good set of things including her insecurities about her appearance and the betrayals from her friends.